Discussions on the role played by and situation of women in the Third Reich not covered in the other sections. Hosted by Vikki.
2335 posts

The painting is more than impressive, certainly even for people who do not know the background at all.
The painting appeals to me, whether I want to own it, is a very different question.
Currently, I do not have an answer to that.

I know your blog, but one question is burning on my heart, what drives you, to be so involved with this topic ?
You don't have to answer this question, of course, but I can understand the passion behind such a topic very well...

The painting is more than impressive, certainly even for people who do not know the background at all.
The painting appeals to me, whether I want to own it, is a very different question.
Currently, I do not have an answer to that.

I know your blog, but one question is burning on my heart, what drives you, to be so involved with this topic ?
You don't have to answer this question, of course, but I can understand the passion behind such a topic very well...

Hello, why the interest in that young woman is because of the research that was done in this forum, while I was involved in the investigation the more I liked the subject, knowing who she was and what became of her, in this world pandemic it gave me time To investigate and I like that, I regret that I entered this forum late as there were great debates that could get enough information and opinions to find a response from fans like we are, over time I find small clues but with little results, I will continue digging, I do not know one day the answer will be found
Cheers
Top

In the estate of my grandparents there are almost all books about the "Vertreibung" / "Expulsion" of Sudeten Germans, in them terrible cruelties, which were done to uninvolved people, mostly civilians.

Many of these documents are too gruesome to translate into English, or even to publish today, all of which is largely known.
But I know today how much my mother must have suffered from all this as a little girl of only 10 years.

The attached photo speaks its own eternal language.

Hans
(I don't own a single family photo about all this)
Mutual offsetting is completely out of the question, given the many innocent victims on all sides.
You do not have the required permissions to view the files attached to this post.
Es ist im Leben wichtig, viel zu wissen.
Manchmal ist es noch wichtiger, zu wissen, daß man nichts weiß.
Top

Hi hans
At this time the investigation of this young woman leads me to be very possibly a civilian of Czech origin or at that time from the Sudetenland, in a book that was uploaded a long time ago entitled "Na demarkační čáře, Americká armáda v Čechách v roce 1945"
(On the Line of Demarcation, The United States Army in Bohemia in 1945) by Petros Cironis on page 77 makes reference to what happened that May 8, 1945, there it indicates that that group of 2000 soldiers of the Wehrmacht lead their women, in the curve that is between Rokycany and Ejpovice when the escorts who were from the US Army realize that there are members of the SS among them, when they begin to separate them these members of the SS try to escape, running towards Ejpovice others take hostage other members and even civilians who were watching that group, the confrontation that you see in the images takes place, in that confrontation with the US troop 8 SS men die but then later a greater confrontation breaks out Since several civilians take the weapons that the Germans had left on the ground and attack the group again where there are 26 more deaths of soldiers, captured Russians, civilians who are between them and SS, the SS who could get out of there F They were separated and left by the roadside 605, which is the image that the group is seen sitting on the side of the road, it is there where LGG appears, in Haglund's shot cards it describes that she (an SS woman) begs for mercy, she can to see her that in her hands the identification of the Sudetenland DAF and Bohemian / Moravian money, perhaps to prove that she was not from the SS,
This gave me to understand that she was most likely the Wife / Girlfriend or lover of a member of the SS and that after what happened the fury of the civilians was against her, beating her and tearing her clothes (something that was seen very often at that time to the women who collaborated with the enemy) it may also be that she was a member of the SS but in the book it does not say anything, it is only mentioned that there were women among them (wife, girlfriend or lover), so my investigation was Focus there and if so it will be very difficult to find information, if she or children or grandchildren decide to comment it will be the only way since as you said it was very difficult and very hard what happened there at that time and time, I understand what must have happened your mother and all those people ...
I leave you the pages (they are in Czech) where this information appears
Greetings 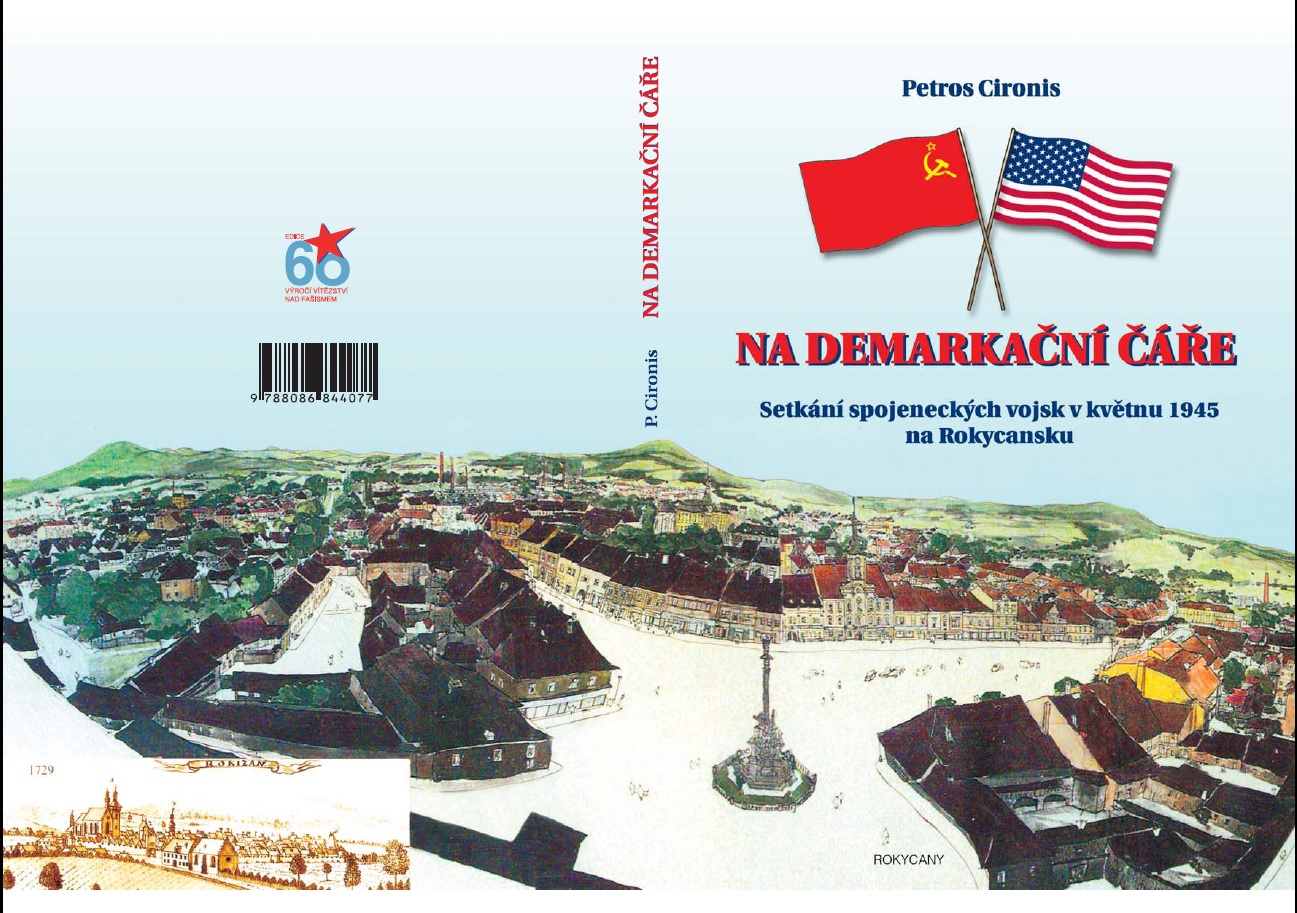 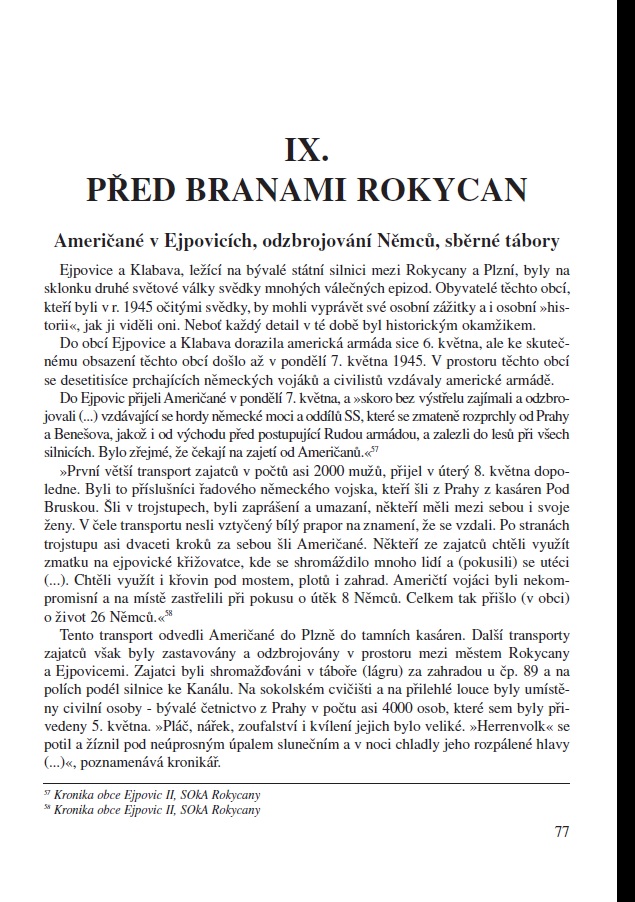 "The first contingent of prisoners, about 2,000 men, arrived on Tuesday, May 8
in the morning.
They were members of the ordinary German army, who came from Prague from the Pod Bruskou barracks,
they moved in 3 rows, they were dusty and dirty, some had their women ... "

shot card where she asks for mercy 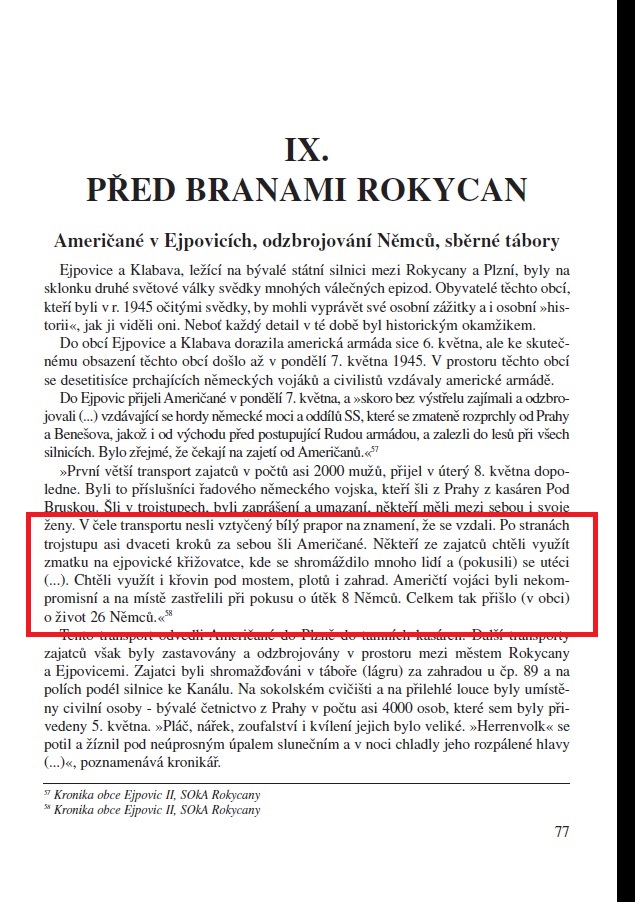 in that box is the confrontation
Top

unfortunately, I am not able to read these articles, but the earlier statements of the witnesses of that time are enough for me.

It is also very clear to me today, why my mother wanted to see the "homeland" of her childhood years in the Sudetenland even in the 1970s
once again.
Our visit there was her final farewell. Only very many years later, I could understand all this.

A few years later, my mother left Germany forever, the lady sought her fortune in a tropical "paradise".


Enough, I do not want to dilute this topic further, sorry.

Many thanks for your time, your work on this topic.

That clip was in the final episode of the epic "World At War". I want to know more about the story of 1945 German lost girl
Top

Yes, The World At War is usually where people first see the clip, I can remember seeing it when the program was first screened. To be honest, the most detailed coverage I have seen on the subject is in this thread, if you have the time to read it all there are many gems here.

Welcome to the Forum Nadiyanoor,

I invite you to start reading from page one . Everything will be much more understandable that way. Try to sort out fake information. If not it turns to be a frustrating activity. Decontamination of the crime scene is advised.

Hello people
Following the search for more information from LGG and some clues already suggested in this forum, the German Historical Museum (DHM) in its records of the foundation body for flight, expulsion and reconciliation (registration of German citizens in other nations in conflict) informs me through Doctor Jörg Schlösser that there is NO record of Lara Bauer in his computer system to track people, recently they sent me from the Austrian State Archives an email that they have NO record of Lara Bauer (according to the data that they uploaded by in 2010 she was said to be of the nationality of Autria).
It was clarified that the name of Lore Bauer was the union of the names given by the blog aerial phenomena and the data that came up here, so that record is not there either, unfortunately the few data that there are from LGG are lost in time
I attach the emails that were sent to me for testing
Cheers 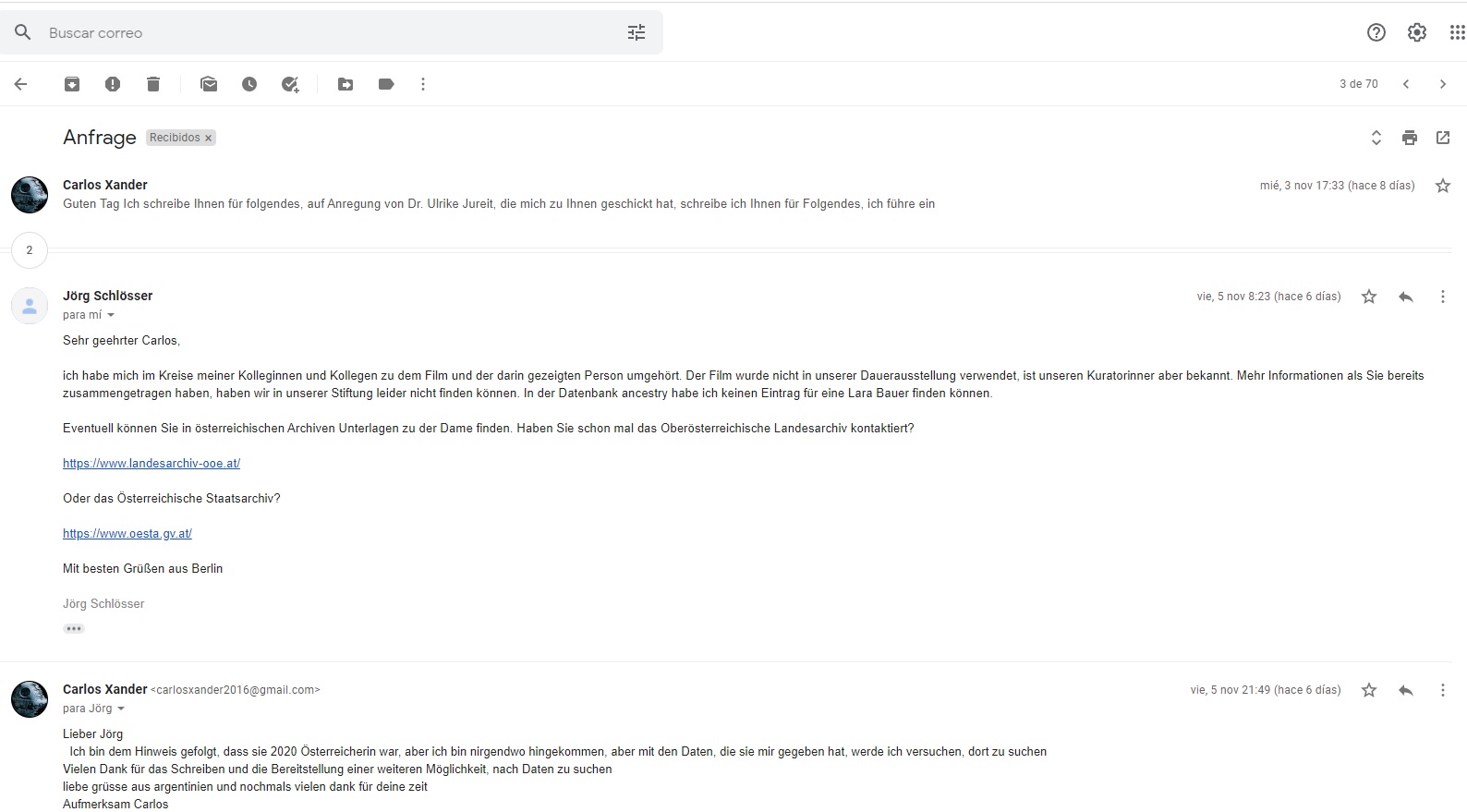 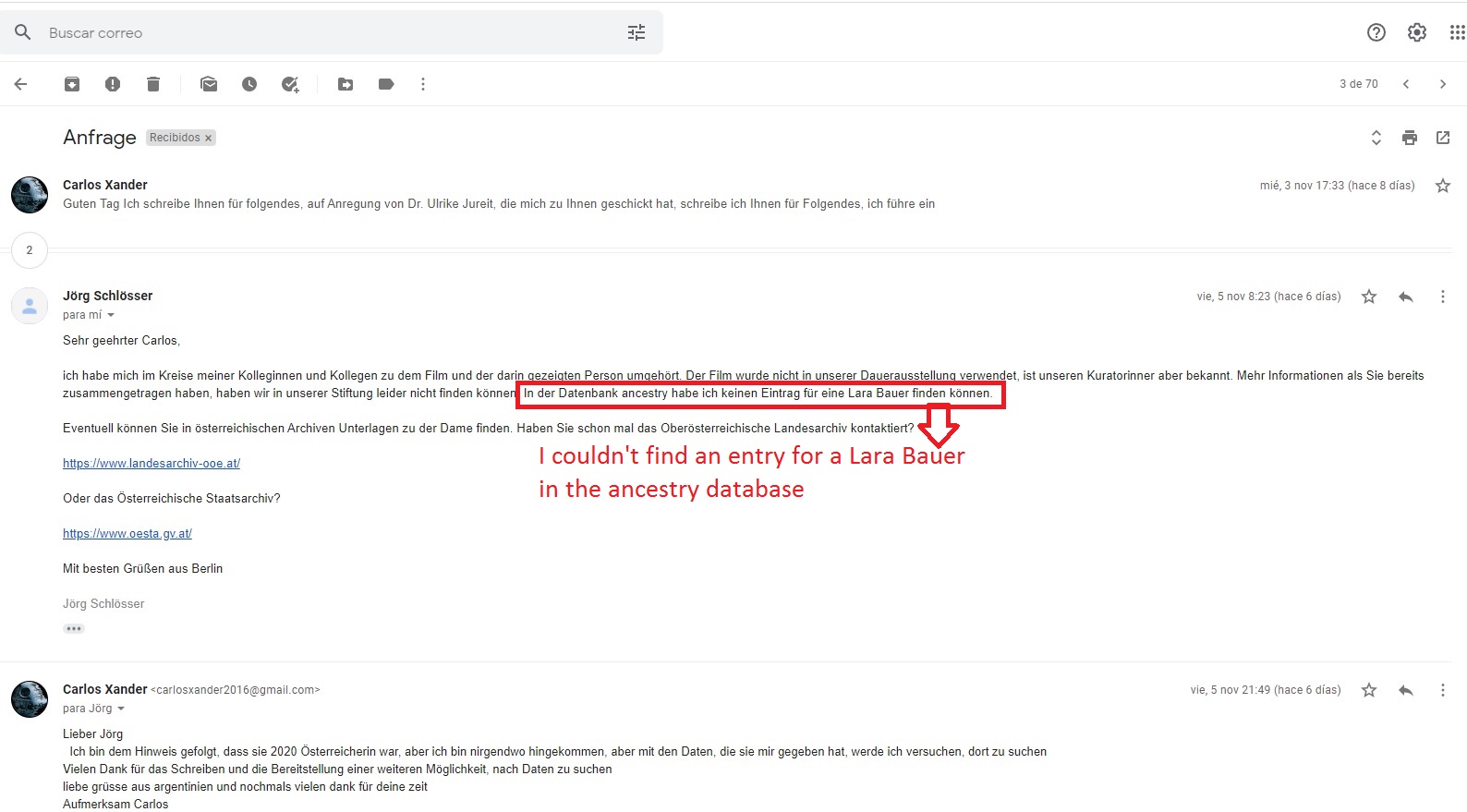 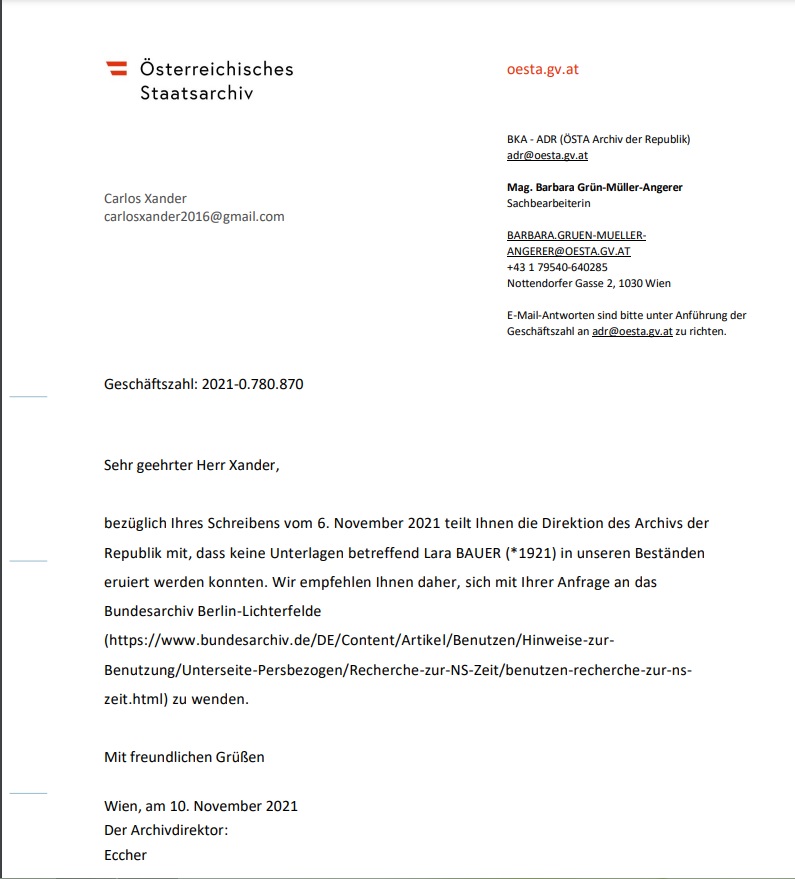 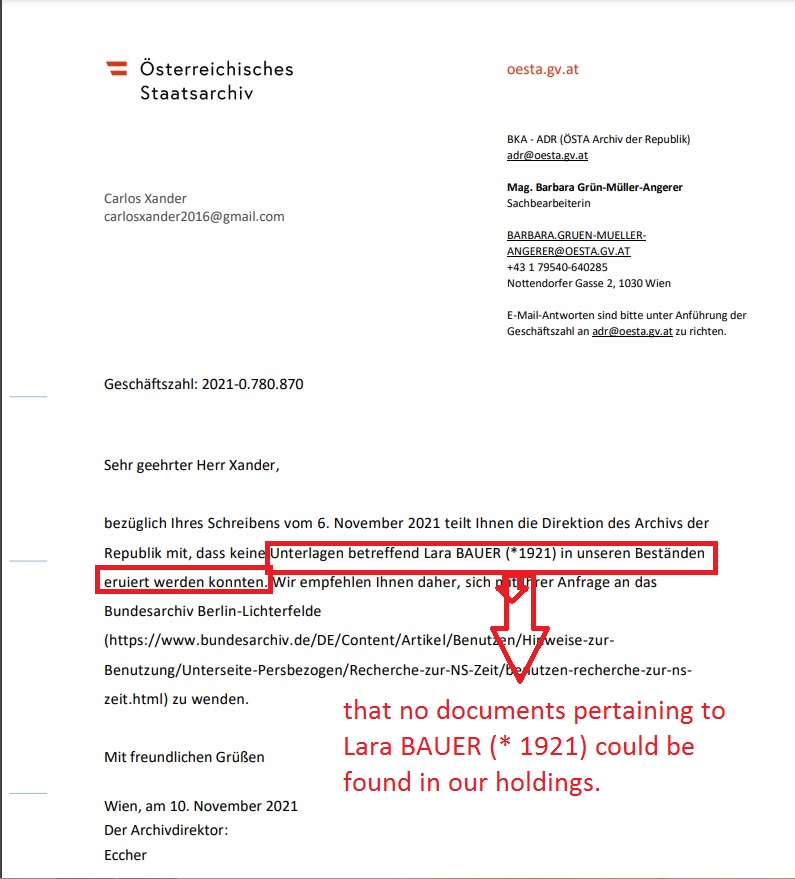 And continuing to search for information on the possible name of LGG Lara Bauer in Austria, the center "OBERÖSTERREICHISCHES LANDESARCHIV" did not find anyone with that name, nor in the city named Kollerschlag there is no registration of parish birth or baptism.
it simply does not exist 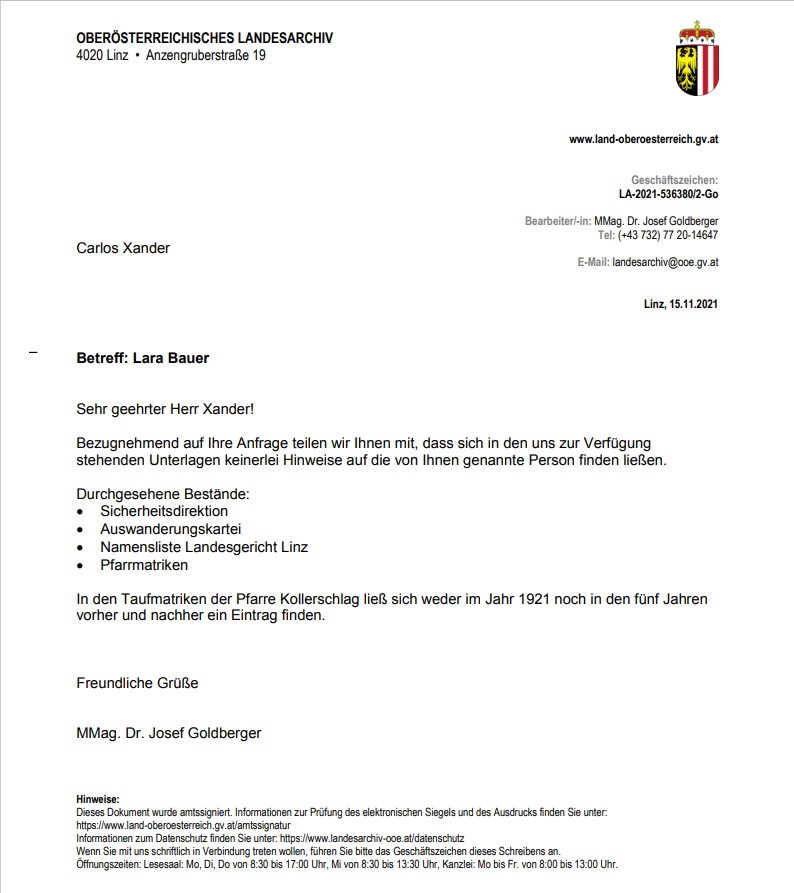 Dear Mr. Xander!
With regard to your request, we inform you that it is available to us
The documents in the list did not reveal any references to the person you named.
Viewed holdings:
 Security Directorate
 Emigration files
 List of names of the Linz Regional Court
 Parish registers
In the baptismal registers of the parish Kollerschlag neither in 1921 nor in the five years
find an entry before and after.
Top
2335 posts