Discussions on the Winter War and Continuation War, the wars between Finland and the USSR.
Hosted by Juha Tompuri
4365 posts

The inscription on the stone says : "Here are burried 14 Soviet POWs". So, it is a grave, isn't it?
Cheers,
Pawel
Top

Well, yes it is, I thought that was obvious. But who were they and how did they die?

Hint: The area at the time was part of the Finnish army firing range. Local residents would not have wondered hearing gunfire from there. But this was something else than just target practice.
Top

After some on-line searching of war memorials I found out this memorial is for 14 Russian, Ingrian, Karelian, Estonian individuals, including at least one Finnish defector, send by Red Army to parachute into Turku region during 1942-1943.

As they were caught apparently in civilian or Finnish army clothes, they were jailed, convicted and then executed as spies in the army firing range in Kärsämäki area near Turku during the time.

Yes, execution and burial place for 14 soviet desanttis. More info about the place and what happened there: http://kaukop.mbnet.fi/kotiseutuhistoriaa.html#Metsak (in finnish).

I once went there few days after Victory Day celebrations. There was a bouquet of flowers with an attached card. Card had a text: "For the memory of Soviet soldiers who died in the battle against fascism." Signed by Communist Party of Finland, Turku chapter.

sandels wrote: "For the memory of Soviet soldiers who died in the battle against fascism." Signed by Communist Party of Finland, Turku chapter.

Thank you sandels for the question.

Next, let us put one of my newly acquired books into action:


Panssari Salama wrote:I purchased the Flight Regiment 1-5 and Flight War School books for a tenner, and Aerial Victories 1-2, Camo patterns, Mannerheim Cross Aces and Blenheim books for another tenner. These are B5 sized books.

The large hard cover books, at 25,- a piece were gorgeous too, but I thought I'd start small first (pun intended).

Go get yours before's its too late!

Without checking I would guess Viljo Salminen.
Top

Viljo Salminen is indeed the correct answer. He received the Mannerheim Cross 2.Class n:o 33 in Nov. 5, 1941. At the time of the award, he had completed 105 flying missions (49 of those already during the Winter War). 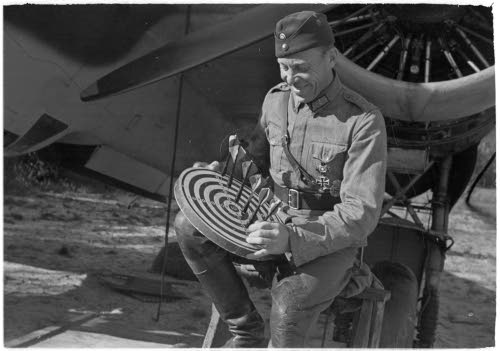 Over to you Esa

^^ Apparently, that's what the bomber pilots consider a good result in darts!
Panssari Salama - Paying homage to Avalon Hill PanzerBlitz and Panzer Leader board games from those fab '70s.
Top

The complete answer includes several things. I will give one point for each correct piece of information.
Top

Those seem to be British tanks. But six of them?

First I suspected Vickers E lost in Winter War, but there were seven losses...

Was this too difficult or is everybody still on holiday and too lazy to reply? Nobody interested in stampings?
Top

Maybe a little tiny hint would be appropriate besides stampings?