Discussions on other historical eras.
275 posts

I meant brutal because of their poverty. Poverty degrades and corrupts people.
Top

But they should become much wealthier by moving to Germany, no?
Top

Traits acquired through generations can't be reversed in a few years.
Top

But even with similar traits, people do tend to perform better in the West. Just compare the standard of living of US blacks and US Hispanics to African blacks and Latin American Hispanics, for instance. Some of this might be due to affirmative action, but some of this is due to the benefits of living in a developed country.
Top

Let's compare the criminal rates among the US blacks and the other Americans.
Top

Unfortunately, crime rates for US blacks are extremely high.

This could be why white flight often occurs once large numbers of blacks move into a particular neighborhood or city in the US:

I've seen mixed signals for US Hispanics, though. There have been arguments that US Hispanics are not that violent in comparison to US whites:

But Yeah, I would certainly prefer to live in a Hispanic US neighborhood (especially one that looks similar to those here in the Southwestern US) to living in a black US neighborhood.
Top

This is for you, Futurist. A Ukrainian settlement in Czarist Russia:
https://youtu.be/QOwW5wdIt_w
Top

It looks more like a one-cement-factory, Soviet-era town in the far east of Russia today.

Are you sure that is the right link?

I quite enjoyed it though. Thanks.

She said it was a Ukrainian settlement, so presumably, it was part of the 19th-century Russian government efforts to colonize the east of the Urals (and any remaining empty lands in Russia) with Russian peasants, Ukrainians, Poles, and even Jews.
Top

FWIW, getting Ukrainians to move to territories such as Siberia, the Russian Far East, and Central Asia in huge numbers was probably Tsarist Russia's best shot at permanently Russifying a huge number of Ukrainians.
Top

I think you may be right.

This map from the 1926 Soviet Census shows how important Ukrainians were in the Russian settlement of the East: https://upload.wikimedia.org/wikipedia/ ... s_1926.jpg

It also shows that in 1926 there were some areas of Russia next to Ukraine that were majority Ukrainian speaking.

This one shows that in 1926 Donetsk and Lugansk, the two areas now disputed, Ukrainians were in a big majority: https://gis.huri.harvard.edu/historical ... ensus.html

The reason why Donetsk and Lugansk are now disputed is because of Soviet state-sponsored immigration by Russian-language speakers to work in the area since 1926.

The Ukrainian territories in the Russian Far East even tried to secede during the Russian Civil War! Specifically Green Ukraine:

As for ethnic Russians in Ukraine in 1926, they were not a majority in the Donbass in 1926 but they nevertheless made up over 1/3 of the total population in the industrial core of the Donbass even back then: 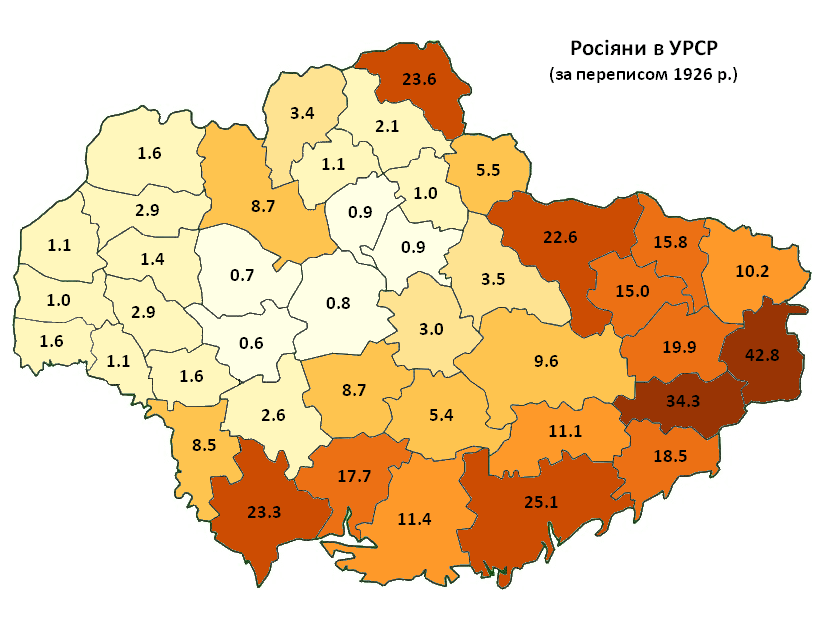 Add in ethnic Ukrainian Russophones, and you could possibly get half of the Donbass population in 1926 be comprised of either Russians or quasi-Russians.
Top

Here's a map of native language in Ukraine in 1926, I believe:

https://en.wikipedia.org/wiki/Demographics_of_Ukraine
Ethnicites Ukraine 1926 1939.jpg
Breakdown of others.
Surprising to see only a 25% decease of Poles 1926-1930.
You do not have the required permissions to view the files attached to this post.
Top

Return to “Other eras”