Discussions on WW2 in Africa & the Mediterranean. Hosted by Andy H
1 post • Page 1 of 1

HERE you can download the full, high-resolution version of the maps. They are FREE TO USE (we only kindly ask you to credit us when you do so).


The Battle (continued)
24 November (Dash to the Wire)
After the victory on Totensonntag, Rommel concludes that the British armour is defeated and that one final push is needed to win this battle. He decides to shift the weight on the south and to send his massed armoured forces towards the frontier. This is the start of so called "Dash to the Wire". It begins around midday on 24 November, when 15th and 21st Panzer are withdrawn from the main battle, and sent south-east along the Trigh el Abd. Rommel leads the attack in person, leaving the army without its commander at a key moment. The German lightning advance creates great chaos on the Allied side - the Germans pass through several British headquarters, and almost capture General Cunningham himself. But they miss the massive Allied supply dumps just to the south of Gabr Saleh, losing the chance to get some badly needed fuel. That night Rommel almost gets captured, when his car breaks down after crossing the Frontier Wire. Luckily for him, General Cruewell spots him and takes him into his Mammoth command vehicle. Two leading German commanders spend the night unprotected in British territory, a mere rock-throw away from enemy forces. 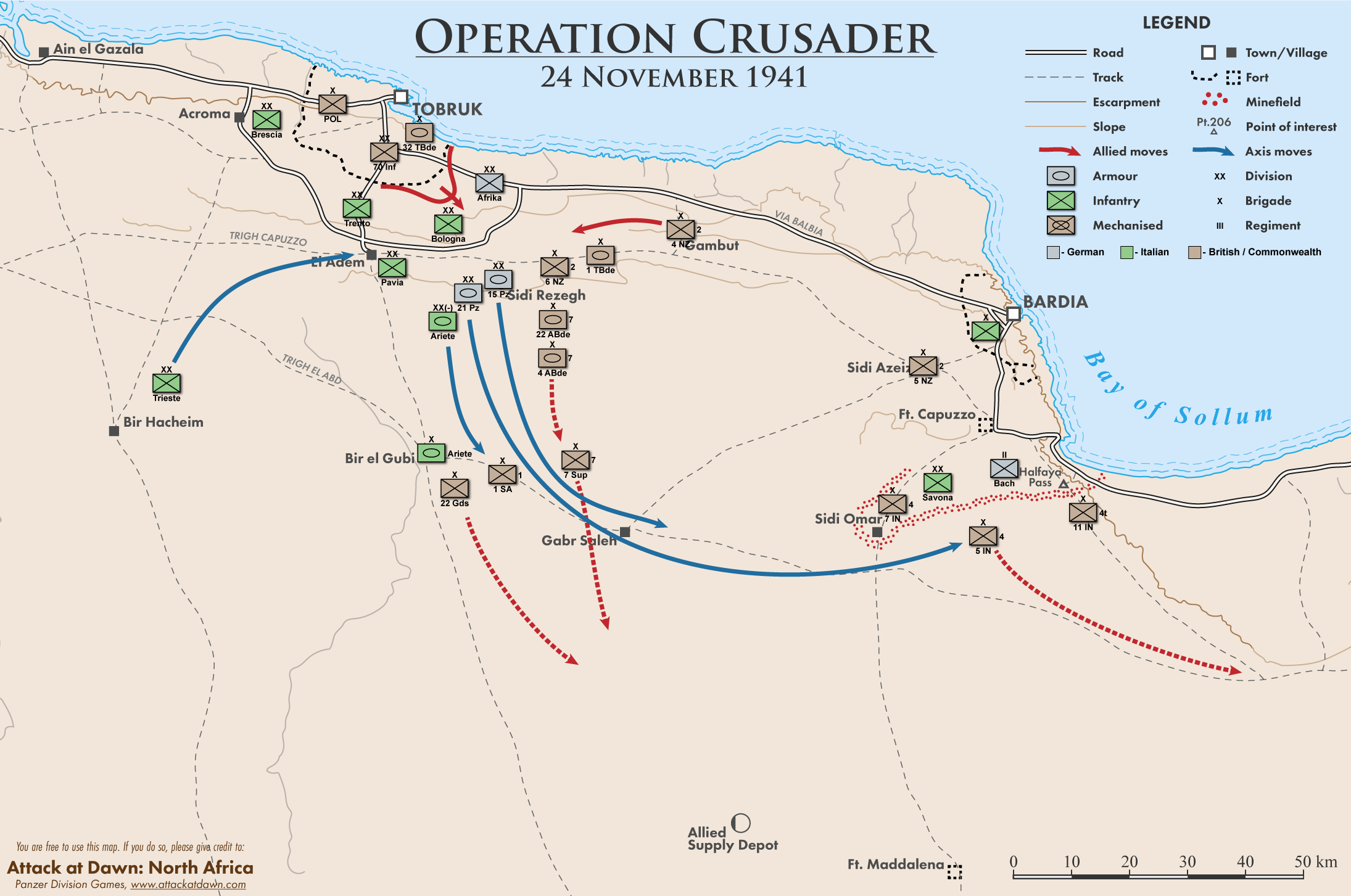 25 November
The Axis forces arrive on the frontier, stretched and low on supplies. They make ineffective piecemeal attacks with little to show for it. Ariete (which was meant to join the Panzer divisions in the dash) runs into the 1st South African Brigade east of Bir el Gubi, and gets halted. Two New Zealand brigades continue to push west, taking the Gambut airfield and moving close to Belhamed. 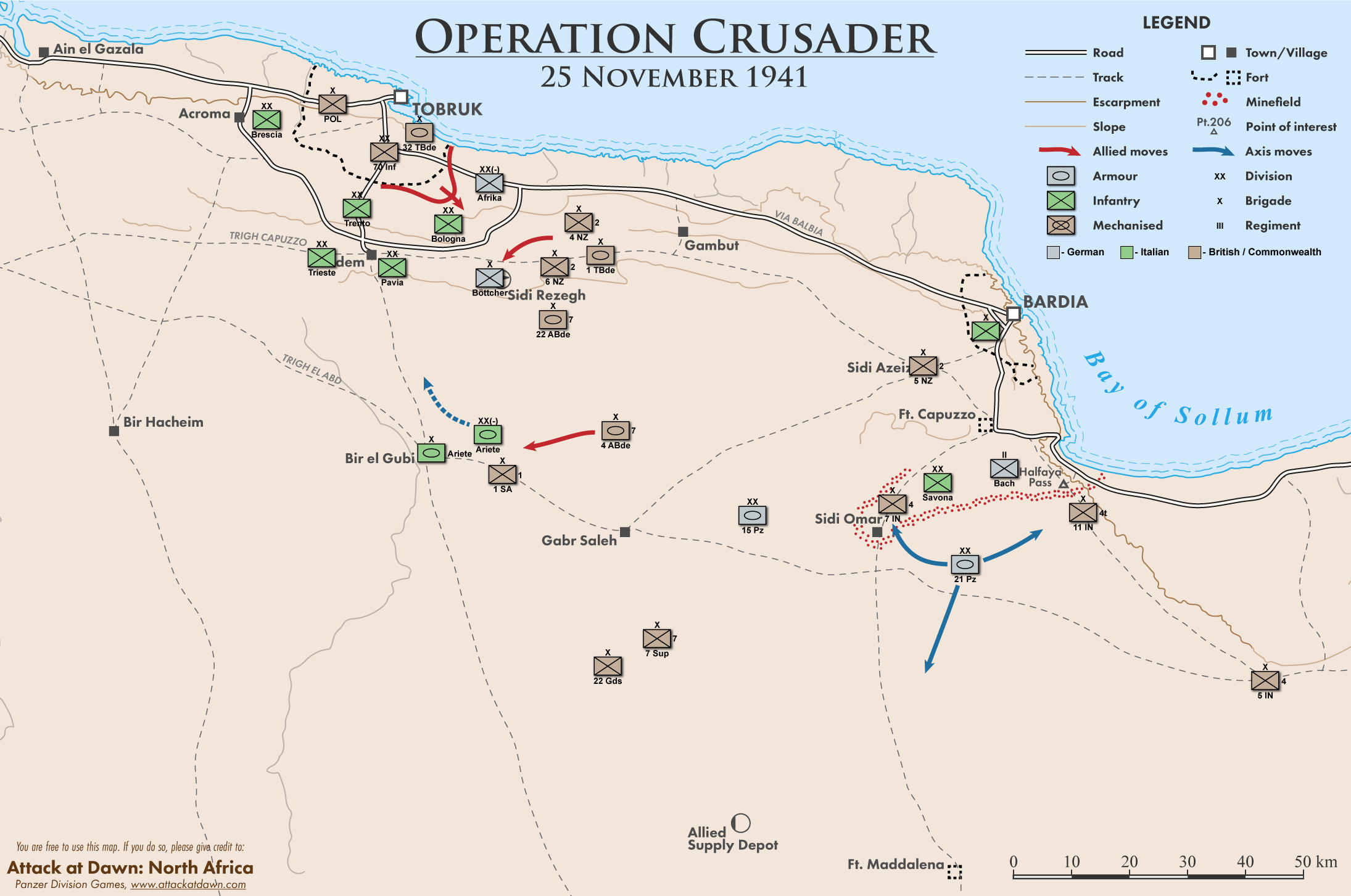 26 November
Two brigades from 2nd New Zealand Division advance along the escarpment near Sidi Rezegh and capture Belhamed and Sidi Rezegh. Tobruk garrison captures Ed Duda. Auchinleck relieves Cunningham of the command of Eighth Army and replaces him with Major-General Neil Ritchie. 15th and 21st Panzer divisions move into Bardia fortress in order to refuel and restock, while Ariete slips the Allied screening forces and move towards Sidi Azeiz. 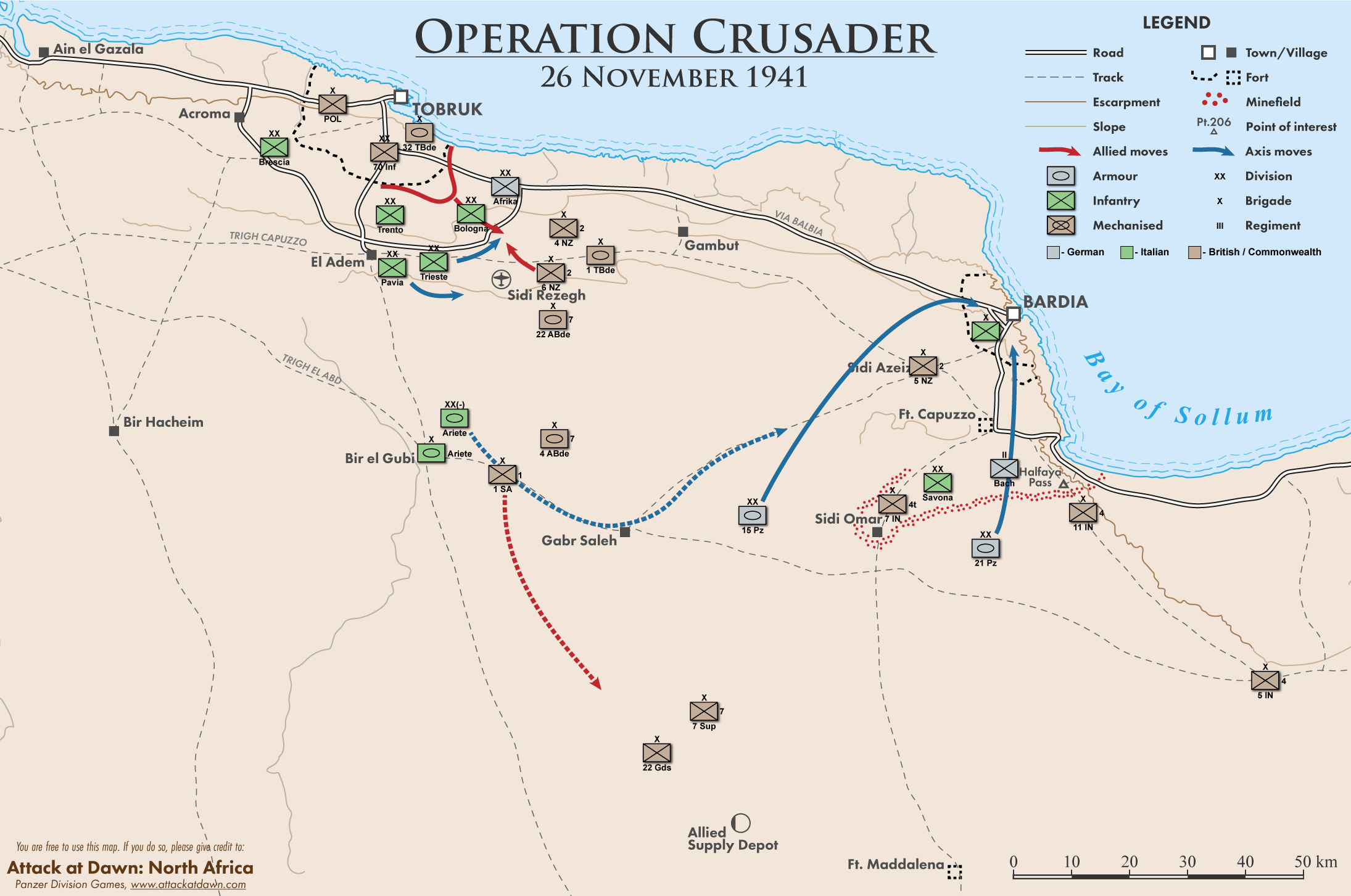 27-28 November
The Allies succeed in linking up with Tobruk garrison. The German HQ realises that the crisis is developing, and order the armour divisions to return to Tobruk area. 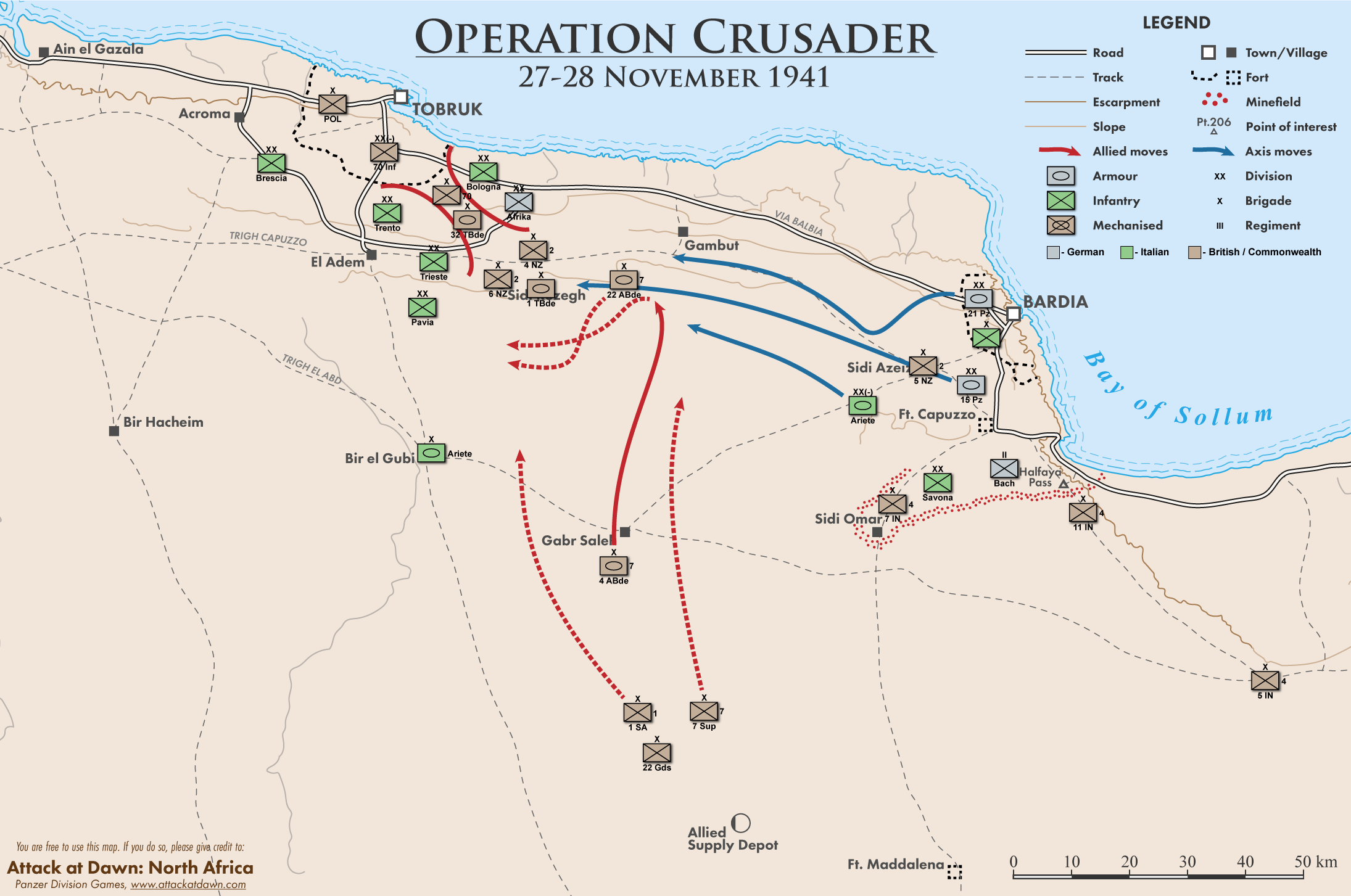 29 November-1 December
The battle rages around Sidi Rezegh, and the Allies fight stubbornly with their mostly infantry force. Two New Zealand brigades suffer heavy casualties and are withdrawn back to Egypt, and the siege of Tobruk is re-established. 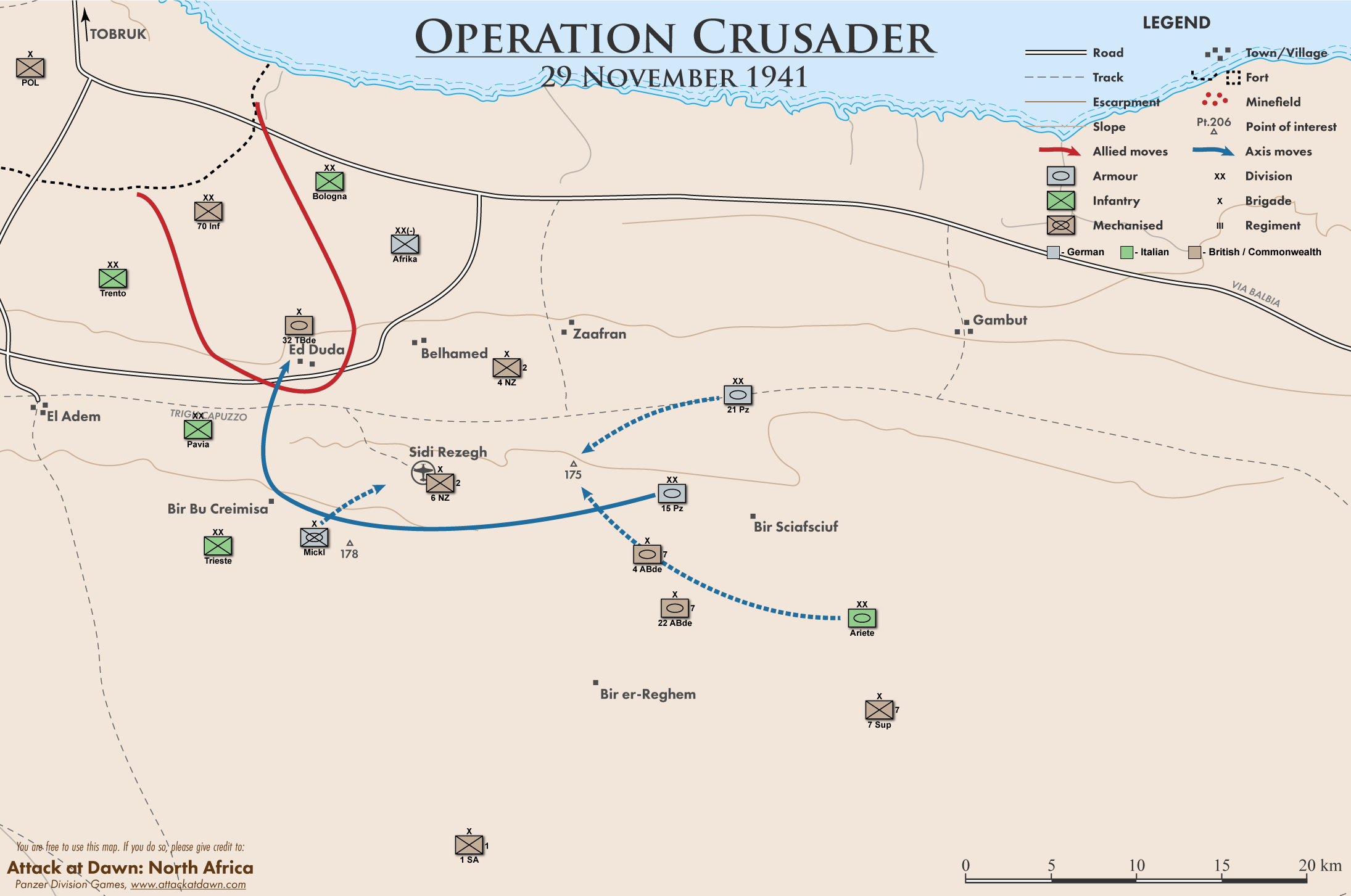 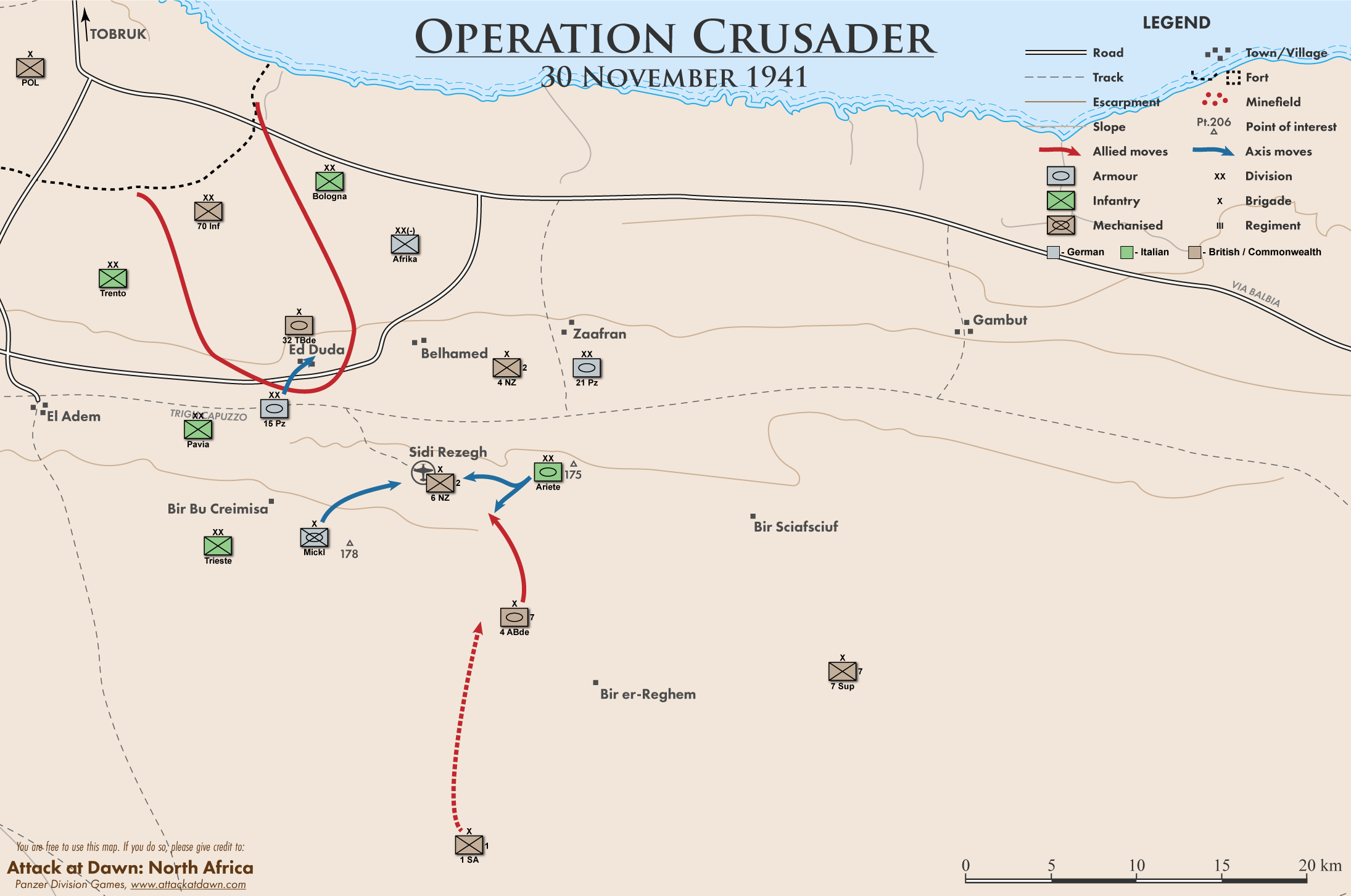 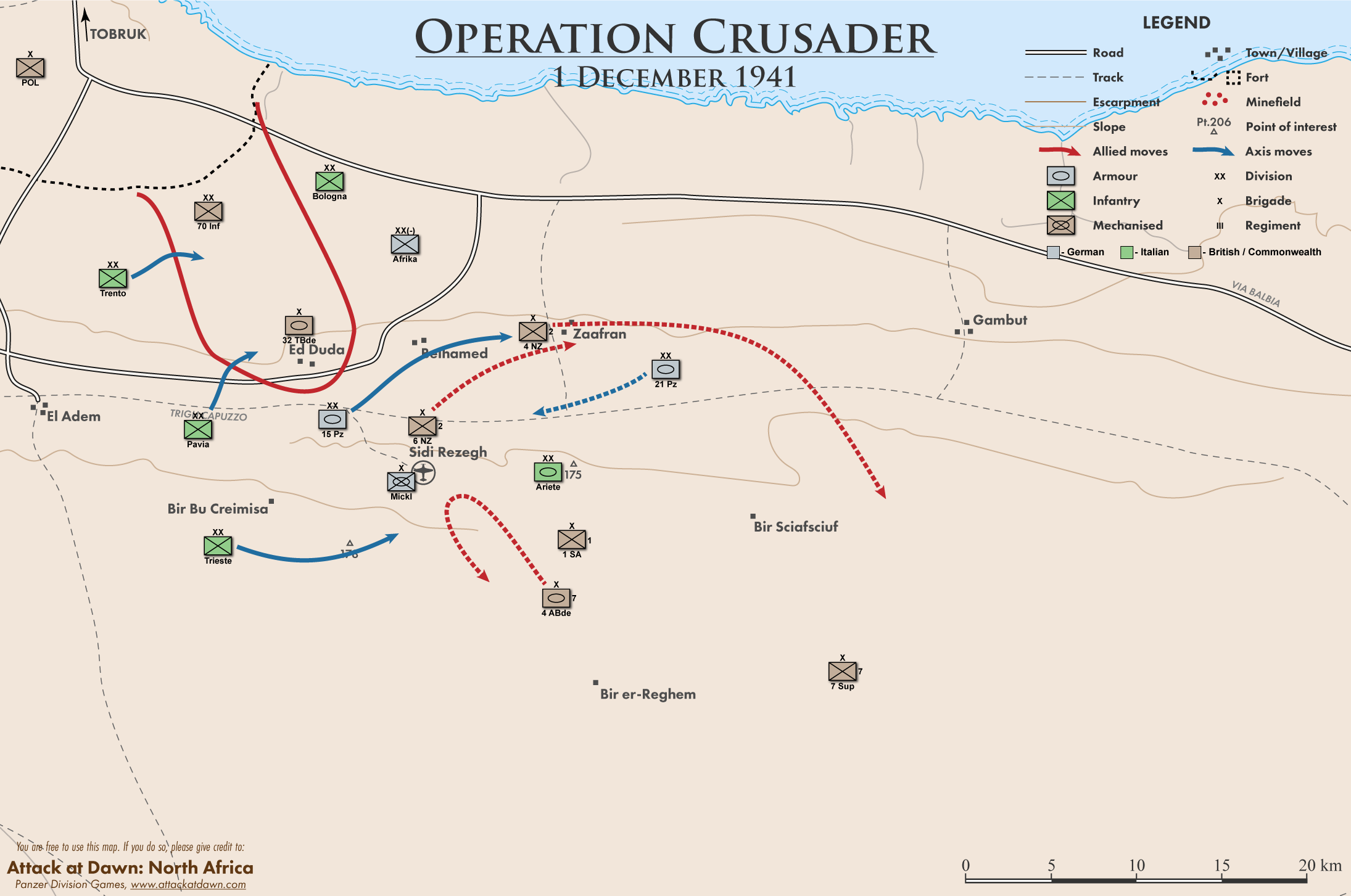 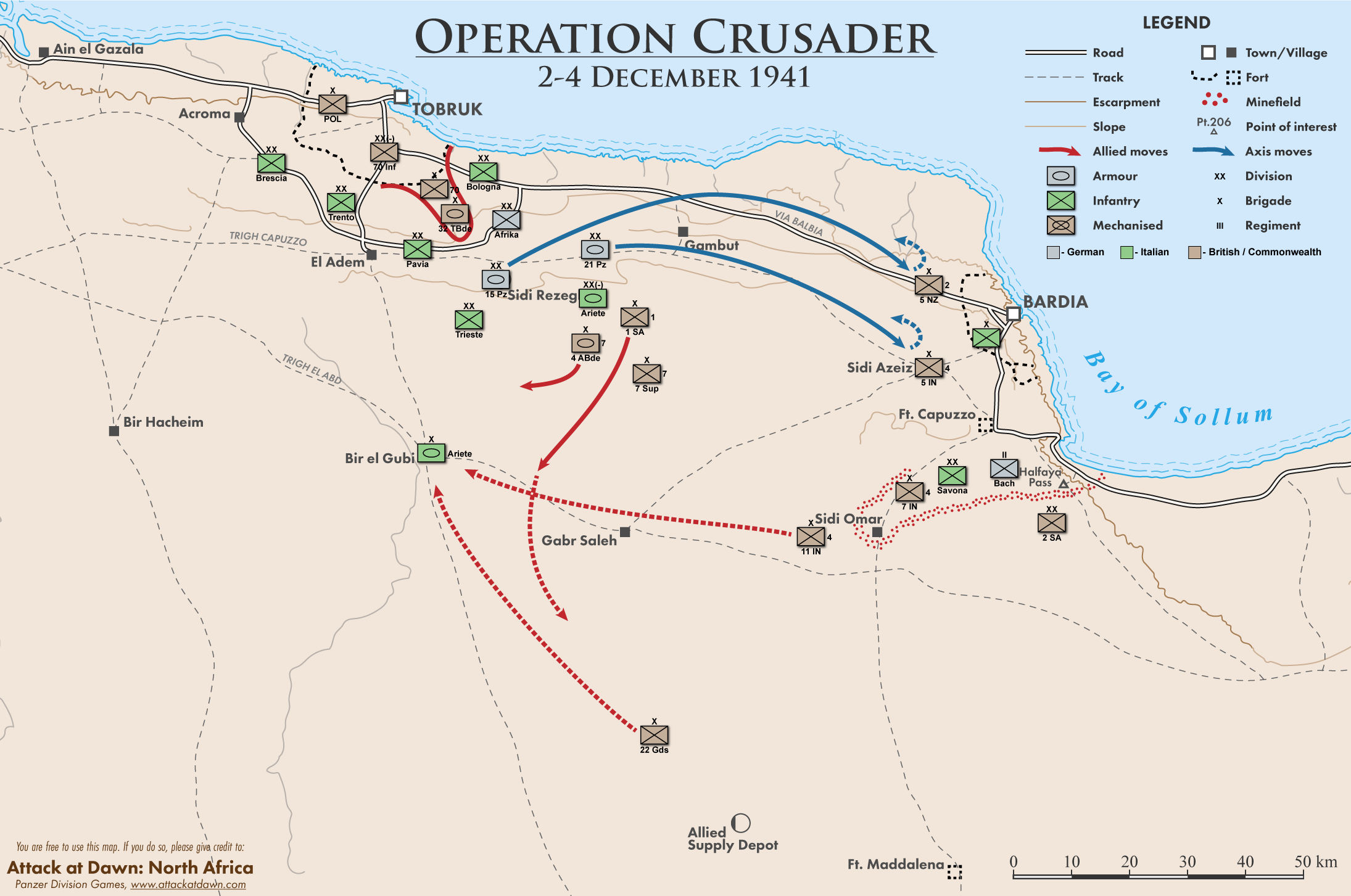 5-6 December
Rommel regroups his forces and tries to reestablish the position in the south, around Bir el Gubi. His attacks drive off the 11th Indian Brigade, but are too weak to press on. The Allies begin moving more forces from the frontier towards Tobruk and El Adem. 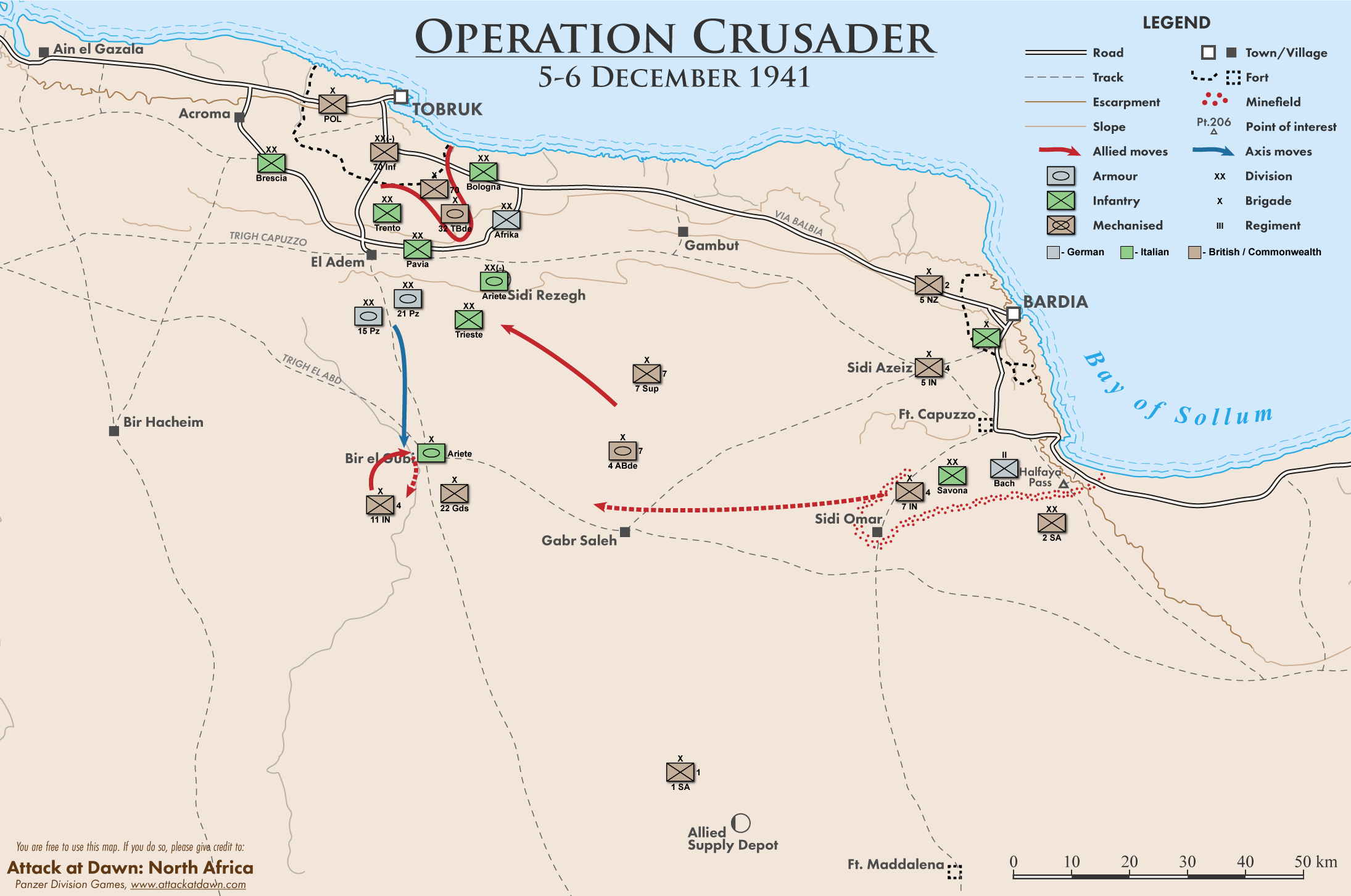 7 December
Rommel realises that his forces will not be able to contain the British pressure for too long. He has no reserves, while the Eighth Army is growing stronger and is receiving new formations from Egypt. So he orders a fighting withdrawal back to the Gazala line. 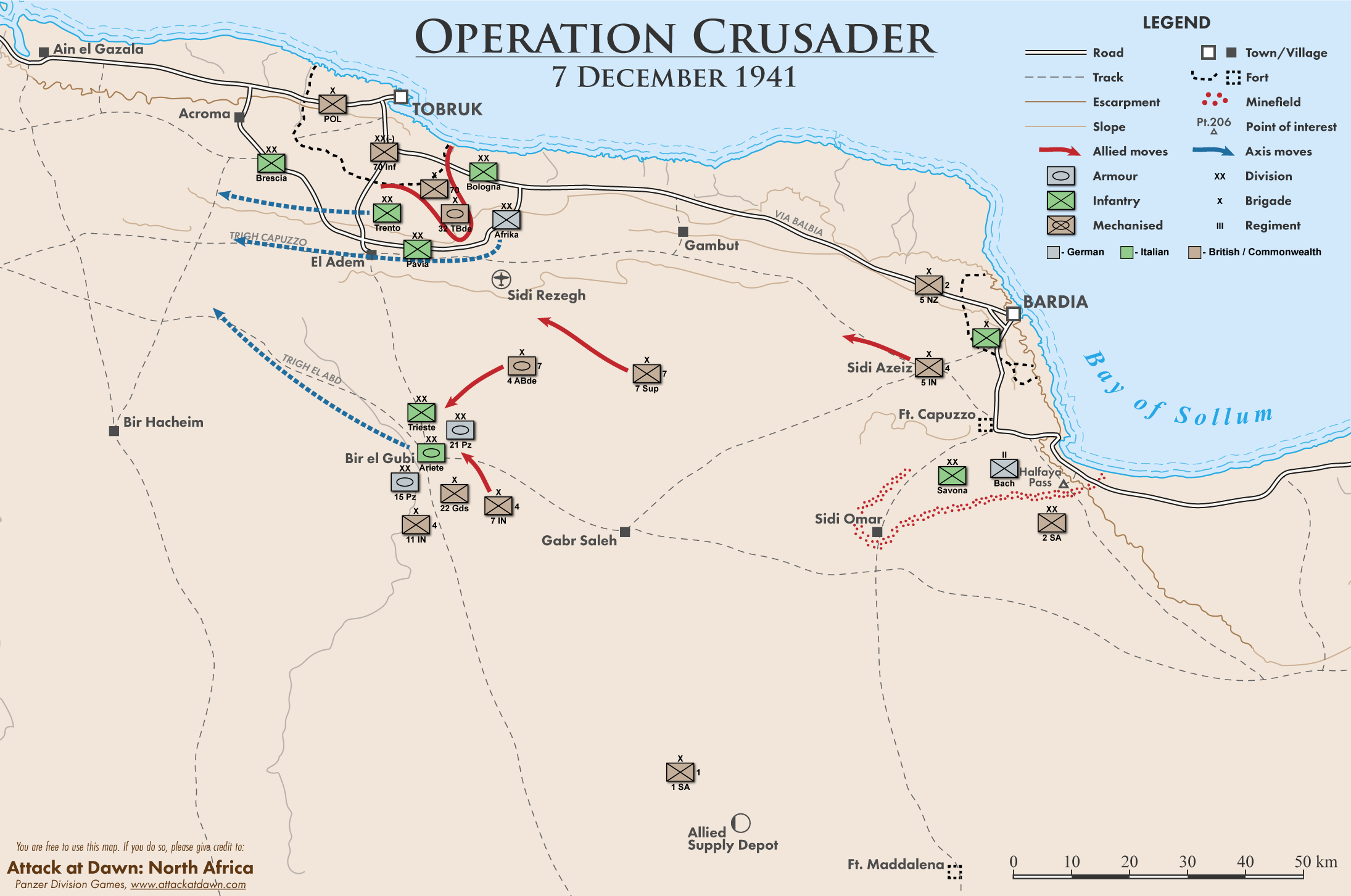 8-30 December
Tobruk is liberated after an eight-month siege. On 15 December the Eight Army attacks the German-Italian Gazala Line combining a frontal assault on the line, with a flanking move on the south. Rommel orders a retreat desert back to El Agheila position, where the line stabilises by the end of the year.

The Crusader Project
https://rommelsriposte.com/
“Now this is not the end. It is not even the beginning of the end. But it is, perhaps, the end of the beginning.”
— Sir Winston Churchill, following the Second Battle of El Alamein