Art wrote:From the article discussed here previously: strength of German Army Groups on the Eastern Front by the end of 1944 (the post says that the table stands for early 1944 but that's a mistake):

HG Sud and A should be switched over actually. I guess about 43 000 SS soldiers in the Army Group Center mostly belonged to the 4 SS Panzerkorps which was transferred to Hungary in the last days of 1944.
For comparison, according to Ziemke the strength of the Army Group Center on 1 October 44 was about 700 000 soldiers (not quite clear what was included here exactly). It seems natural that it increased somewhat after 3 months of relative lull.
Curiously enough, Soviet official sources (e.g. 12-volume history of WW2) estimated the strength of Army Group Center in Prussia in January 1945 as 580 000 regular soldiers and 200 000 men in Volkssturm. A rare case when they underestimated German strength instead of inflating it.

Soviets at the end have tanks but short in infantry after many losses... and 3 Tank Armies get used with a Polish Infantry Div in Berlin...
Top

German docs in Russia has a very complete set of documents of the XXIII Army Corps/2 Army from the period of interest. In particular:

Personnel losses of the XXIII AK in January 45:
http://wwii.germandocsinrussia.org/pages/365057/zooms/5

Great links again Art (and a handy short cut)! Saved me from serious 'trawling' of documents.

nice page, regarding the fall of east prussia: http://www.klee-klaus.de/der_untergang_ostpreussens.htm
Top

My bad, the correct link is:
http://wwii.germandocsinrussia.org/pages/364951/zooms/5

FORBIN Yves wrote: ↑
13 Jun 2018 13:43
And on this map in attachement i think German defensive lines ? and we can trust their locations on the map ?

Some more about defensive positions. German system of defensive lines in the East (start of 1945): 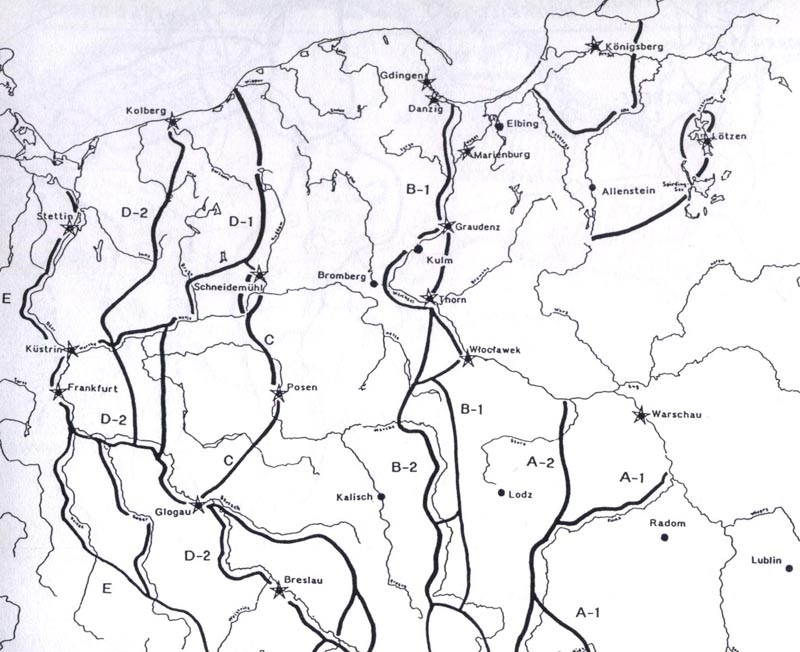 German fortifications in Prussia in the sector of the 3 Belorussian Front (Königsberg-Tilsit-Gumbinnen):

And the two Divisions in the PZK GD have each one Infantry Bn of the Fusilliers Korps Rgt ( which have 2 ) rattached during january fights so 5 Infantry Bns for each.
You do not have the required permissions to view the files attached to this post.
Top

Regarding casualties: OKH counted more than 200 000 men killed, wounded and missing in HG "Nord" in January-February 1945 (not counting 2 Army which went to the HG "Weichsel"
http://wwii.germandocsinrussia.org/pages/179589/zooms/5
That was definitely a lot.
Top

That's a story I don't quite understand. Stug.Br. GD had 32 Stug. III and 8 StuH 42 shipped to it on 16-19 January 45. However, it seems that thy didn't reach the unit but were deployed elsewhere:
https://www.feldgrau.net/forum/viewtopic.php?t=24064
Did the brigade had any other StuGs by mid-January?
Top

the book "PzG to the Front" and "PzK GD" has info on this. IIRC Spaeter states that it was because of the Soviet offensive. So the splitting of PzK GD units occurred and they were never reunited as anticipated.

BR had a panzer regiment with 2 battalions, however, the combat ready Panther battalion was allocated to PzD Kurmark and never fought with the division. The other never completed its development in the war.

Ok, I've got it. What I don't understand is whether Stug. Br. GD had any assault guns present in mid-January.
Also:
1) "Brandeburg" has 21 StuG IV shipped to its AT battalion on 1.1.45. Where they actually present with the division?
2) GD had 21 Pz. IV lg. shipped to its AT battalion on 10.1.45. Did they arrive to it and were they present with the division when it was committed to battle (15 January 45)?
Top

Apparently caught up in the Soviet advance (lost most of its JPz's) before it could reach its parent unit. Kamen Nevenkin makes some comments about 'GD' StuG Bce and 'BrB' Pz.Jag.Abt a little further into the post.

Thanks, that answers the last two questions. So Pz.Jg.Abt."GD" fought against 2 Belorussian Front close to the parent division and Pz.Jg.Abt."Br" joined its division in Poland in mid-January. There is still one thing - Kamen Nevenkin wrote that "On 16 January both PzJgAbt "Br" and StuGBr "GD" were transferred from Mielau to Lodz. The former had 21 StuGIV while the later - 43 StuG and StuH". Does that number of 43 include the shipment of 40 vehicles in mid-January mentioned above? According to Martin Block they didn't reach the brigade and were distributed among other units.
Top
157 posts