Hello, I found long time ago info about the Romanian Brigade. I had not been able to post what I found, here it is:

As you can see in this picture that is always used regarding this battle, there's a strange unit besides de III./Pz.Gren it seems it is called JG. 9, always felt strange to me, like what does it means? an air unit maybe a contraction of Jagdgeschwader? why there with the infantry so close to the front? maybe it was meant to mean an antitank unit? I then looked around, felt that the "I" near the top-right where it says 46. Inf. Div looked oddly similar to the letter "J" in JG. 9 and realized it probably means not JG.9 but IG.9 ! 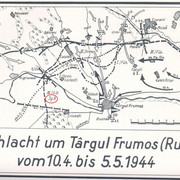 And regarding this material on an old page about rumanian army in ww2, we can see the structure of the Divizia 1 Garda. 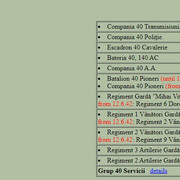 I'm posting pictures because the page behaves strangely and tries to redirect you to another ad page, but if you want to try, go to http[:]//www[.]geocities[.]ws/dangrecu/D1G.html, remove brackets.

in the same page we encounter the next piece of evidence on the composition of this Rumanian unit, that 'fell back' in disarray leaving the Grenadier regiment in a predicament.

26.4.44: the Tactical group 'General Opriş' was established (assigned to the German GD Panzer Division); during the following days this group stopped all the Soviet attacks.

good, it participated in First Targul Frumos too and gave good account of itself.

2.5.44: finally, the Soviets broken the Group's defence lines; it withdrew to Dumbrăviţa / IS and Ruginoasa / IS (W of TÂRGU FRUMOS), then S of the fortified line maintained by the other Romanian units.

And finally, on the book "Tigers of the death's head" is this paragraph mentioning the unit.

On 12 May, SS-Sturmgeschütze-Abteilung 3 deployed a single company under SS-Obersturmbannführer
Muller toward Oboroceni. On the twenty-sixth, it relieved elements
of Sturmgeschütze-Brigade 228 assigned to the Romanian Brigade Opris. Another StuG
company with eight StuG’s was deployed on 23 June and attached to the Romanian
Guards Brigade and returned to divisional control on 1 July.

So, in my opinion the 'General Opris' Brigade was the Regiment 9 Vânători Gardă (Infanterie Garda 9 or maybe Infanterie Gruppe 9 in the map) with maybe a battery or two from the StuG.Brig. 228 attached and according to the first map here in the beginning and in the page I mentioned about Romanian army history, it was in fact assigned to the Pz.Gren.Rgt "GD" in contrary to what Manteuffel said in the now famous report about this battle that he did not mixed his forces with Rumanians. Of course, this is all conjecture as I do not have access to first hand documents. Maybe we learn later other units assigned to this Romanian Brigade. 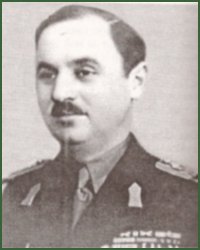 Other mysteries to me is where was the II./Füsilier located and why are there two III./Grenadier units on the map above? maybe the top one near point 197 is the II./Füs ?

I believe I have discovered the solution to the strange units on the map.

The 'III/G.D.' and the 'Jg.9' in the southwest section of the front do not make sense as German unit designations.
I too wondered if it meant 'I' or 'J' but it still did not fit or make sense.

But when treating them as Romanian units the solution appeared.

As you mentioned above, near T-F in April-May 44 there was a unit called

The English translation of Vânători is 'hunter' which in German is 'Jaeger'
This fits well with the 'Jg.9' as Jaeger Rgt 9
If we regard the 'III./G.D.' as a mistake by the mapmaker to mean III./Gd., and add it with the Jg.9 right below it, it reads not as two different units, but as one Romanian unit:

III./Gd.Jg.9
Which in German would be a common way of abbreviating

III./Garde-Jaeger Rgt. 9
Which is an exact translation of

III./Regiment 9 Vânători Gardă
a unit from the 1.Gde.Div.
and which happens to be part of 'Brigade Opris' and mentioned by many sources thus tying everything together quite well.


Another small error on the map concerns the Panzer-Fusilier-Regiment GD.
In Spring of 1944 prior to the battle of Targul-Frumos, the Pz.Fus.Rgt.GD's First Battalion was sent back to Germany for conversion to an SPW battalion, and becoming fully 'gepanzert' like the I./Pz.Gren.Rgt GD.
But the map has mistakenly indicated the I. and III. battalions on the front - instead of the II. and III. battalions as it should have.
By the way, it appears GD had very few SPW available as infantry combat vehicles at this battle, maybe only 5-10 at most.

Note: If that link to the Romanian army
http[:]//www[.]geocities[.]ws/dangrecu/D1G.html,
is causing problems for you, go into your browser's settings and block all popups and redirects - but most importantly - disable or block Java for that website only. Worked for me.
Top

Thanks for the explanation about the I./Pz.Füs.Rgt now the picture is clearer.

Can you help to clarify the composition of the 3.SS-PzDiv Totenkopf for this battle too? I have this:

3. SS-Panzer-Division “Totenkopf” - Kampfgruppe (did it had a name this force?) (According to the book "Tigers of the Death's Head") in around T-F area may 2-8:

*I wonder if those 12 PzIV left at Roman did make it to the GD and 24.Pz? It seems Totenkopf put the ones they took into action really quickly, I don’t see how the others couldn’t do that too.

I'm planning on naming this Kampfgruppe "Beiermeier", as he seems to have been the local commanding officer. Would it be wrong to do so?

EDIT: Out of curiosity I just looked up "Kampfgruppe Beiermeier" on google and what do you know, a book containing a description of this very battle discussed here since time inmemorial actually names the Totenkopf Kampfgruppe like so

The book is called "Tank Warfare on the Eastern Front, 1943–1945: Red Steamroller" by Robert Forczyk. His other book about the Crimean campaigns is very good and full of details so I'm going to believe him on this one.
Top
138 posts