The Battle for Rots and Le Hamel

Discussions on WW2 in Western Europe & the Atlantic.
6 posts • Page 1 of 1

The Battle for Rots and Le Hamel

A couple of things

First, I am looking for the German OOB for the defense of Rot and Le Hamel on June 11th. So far I've determined the major formation was 'Papa' Krause's 1st Battalion/26th PzGr, but was the entire unit there or only parts?

What about the escort battalion at the Chateau?

The number of tanks from Pfeiffers Panther company?

Also, I came across this interesting tidbit in the Panzer Lehr page of the Axis History Factbook:

On 9 June 1944 four POWs from the division were found dead in Rots by soliders from SS-Panzergrenadier Regiment 26 of 12 SS Hitlerjugend, they had all been shot in the head.

This has me a bit puzzled. For one, I've always understood Rots to have been within the 12th SSPz division's AOR, and by the time the advanced elements of Lehr had arrived on the scene the I/26th Pz Gr Regt had already taken up defensive positions opposite Norrey and Rots.

So why would there be Pz Lehr troops at Rots?
Top

The German OOB can be found here:

http://www.fireandfury.com/scenarios/rots.pdf
"Air superiority is a condition for all operations, at sea, in land, and in the air." - Air Marshal Arthur Tedder.
Top

Panzer Lehr's Panzergrenadier Regiments had been operating against the Canadians in the Brouay/Norey area on 7th and 8th June, isn't that fairly close to the Rots/Le Hamel area ?
Alan
Top

Alanmccoubrey wrote:Panzer Lehr's Panzergrenadier Regiments had been operating against the Canadians in the Brouay/Norey area on 7th and 8th June, isn't that fairly close to the Rots/Le Hamel area ? 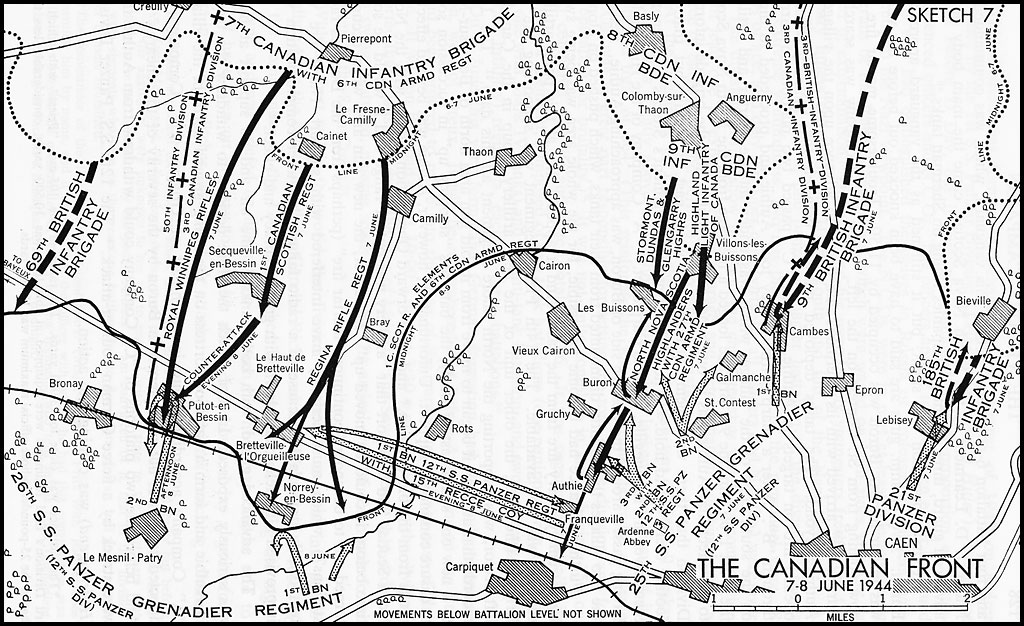 Do you have any info on Lehr's transit and deployment to the battle area? I know they got troops to Brouay ahead of III/26 SS PzGr, but didn't think they deployed even further east.
The gods do not deduct from a man's allotted span the hours spent in fishing.
~Babylonian Proverb
Top

The movement of Lehr is covered in Franz Kurowski's "Elite Panzer Strike Force. Germany's Panzer Lehr Division in WW2" which was being offered free on Kindle a while back.
Alan
Top

Maybe a little late for this post, but it is good to know that a subgroup of the 716.Inf.Div organized around the remains from the II./Art.Rgt.1716 and fragments of infantry (II./Gr.Rgt.726 and 736) had been positioned since June 8 in front of the SS.Pz.Gr.Rgt.26. This observation explains the German loss figures recorded by the British commandos and other Allied units.
Regards
Romain
Top
6 posts • Page 1 of 1