Discussions on WW2 in Western Europe & the Atlantic.
18 posts

I've been reading about the "coup de main" at pegasus bridge in Nrmandy from different sources. With conflicting accounts.

After the successful taking of the bridges the germans tried to regain them ussing whatever forces they had.

It seems first with troops pertaining to the Pi. Abt from the 716 infanterie division and in the morning with elements of the 21 panzer including 4th pz Co. Pz IV's.

I also read that 2 "zug" from 1st Pzj. Abt 1716 (from the 716 infanterie) were directed to the bridge at Benouville. As far as I know they were Marder I's on Lorraine chasis.

All account say that the first panzer that approached during the night to the Benoville bridge was destroyed using a PIAT but sometimes is it called it was a Pz IV and sometimes a light french tank (somua, hotchkiss, renault?).

I doubt it was a Pz IV because they were not directed to recapture the bridge until the morning so it was very difficult a Pz IV was wandering around. Maybe as a recce??

I also doubt it was a "beute" french tank. As far as I know there weren't any around. 21st panzer Somuas also as far as I know were not available and probably sent away befor the landings.

My guess is that it probably was a Marder I on lorraine chasis. belonging to the 1st co. pzj Abt. 1716.

I don't know is there is any picture from this action.

I'd love to know this too, I've often wondered whether it was a french marder or PzkwIV. Sgt Wagger Thornton 2 Oxf Bucks who knocked it out with a PIAT says it was a Mark IV and is quoted on page 64 of 'Pegasus Bridge & Merville Battery' by Carl Shilleto in the 'Battleground Europe' series. A photo would be great as well!
Top

I know allied tank recognition wasn't that good especially when it came to figuring out what was or was not a Tiger tank, but I think they would know the difference between a tank and a self propelled gun.
So while British accounts don't completely rule out a French tank being the vehicle KO'd, I doubt it was a Marder I
Top

Yes the difference between a Marder I (lorraine) and a Pz IV should have been clear for trained soldiers but...

If it was a Pz IV, where did it come from ?? It could not be from Pz Regt. 22 they were not near and they attacked the bridge later using the 4th Ko.

Instead the Marder I's from 1716 pzj abt were sent to the bridge earlier and they were also nearer.

When the photo unit turned up the next morning what had happened to the wreck; i recall that there are pics of the guys dug in around the bridge and guys marching over ... isnt there lol?

To further confuse matters for me, I've just gone through my old 'Brightly Shone the Dawn' published in 1980 this was written by two ex officers Garry Johnson and Christopher Dunphie and was presumably from sources at the Army Staff College which I would have thought was as good as it gets, as they used to directly interview the veterans. In this they state on p37:

'As they approached the watchers made out the shapes of two half-track vehicles, probably acting as a reconnaisance for the armour. The PIAT gunner took aim, waited as the leading half-track came on and then fired. It was a direct hit and the half-track exploded spectacularly. It must have been packed with ammunition, for it continued to blast off with explosions and to illuminate the darkness with flashing tracer for a half an hour or more.'

Any thoughts or pointers on this would be much appreciated
Top

Too Low Rez but it would seem they either cleared the road (liekly) or the H/T / tank was not shot up that close to the bridge (again very likely).

Hopefully this will work: Pic1

Pic2, the other side of the bridge

While you cant access the complete archive online i am surprised to find that there are no photos of a wreck near the bridge; surely it would have made a great propaganda coup - lone para halts 21st Panzer Division!!!!!1!!!111! LOL OMG

Intriguing indeed! Ambrose (p.118) and Shilleto (pp.63–64) maintain the tanks were PzKw IVs, Howard (pp.127–128) merely mentions “tanks,” but Edwards (p.45) holds that they were "light tanks." Lieutenant Dennis Fox later conceded that the second vehicle “wasn’t really a tank either, it was a sort of a half-track” [Barber, The Pegasus and Orne Bridges, p.135). And indeed, the two vehicles were most likely either reconnaissance half-tracks with a gun mounted or self-propelled anti-tank guns. 716. Infanterie-Division would not have had tanks on establishment, but 1./Panzerjäger-Abteilung 716 is recorded as having at least four 155mm sFH 13 auf Lorraine Schlepper (155mm heavy howitzer mounted on captured French tracked carrier) on D-Day, courtesy of Major Becker’s conversion ‘factory’ in Caen. Based in Biéville, two of these may have been called-up to deal with the nocturnal attackers at the Canal de Caen bridge. Unfortunately it has often been the habit for troops in the field, especially at night, to designate any tracked vehicle ‘a tank,’ particularly if it also appeared to have ‘a large gun’ mounted on it.

Given that the vehicle's ordnance was 'cooking-off' for almost an hour, it is quite possible that the wreck had become unrecognizable when daylight came, and may perhaps be the reason there are – or so far appear to be – no photographs (or any further documentation?) taken, for example, by clearance parties.

Neil Barber's recent The Pegasus and Orne Bridges. Their Capture, Defence and Relief on D-Day (Pen & Sword Books Ltd., Barnsley 2009) – which must so far be the most comprehensive account of the actions at and near the bridges – has brought previously unknown, or at least unregarded facts to light. For example, I was hitherto unaware that just before noon on D-Day another half-track (wrongly identified as "a German Mk IV tank" by Major Nigel Taylor, CO 'A' Coy, 7 Para Btn) almost reached the bridge before being knocked-out by Gammon bombs (p.188 and n.10, p.305). In Appendix B (p.280) Barber surmises that it was a leichte Zugkraftwagen 37 U304(f), based around a modified French Unic P107 half-track. [see three images in Peter Chamberlain & Hilary Doyle, Encyclopaedia of German Tanks of World War Two (Arms & Armour 1978/1999) p.224 – and probably dotted around the Internet].

Oddly, none of the accounts by Sword Beach-landed Commandos, Engineers, White Scout cars, ambulances or any other carriers approaching the bridges mention either of the wrecks of these two half-tracks. Furthermore, as the wrecks were in the middle of the road, the arriving Sherman DDs of 13th/18th Hussars will have had to knock them aside in order to reach and cross the Canal bridge (although several Shermans may also have reached the Canal bridge along the canal towpath). So, if the two wrecks had been cleared that day - by whom?

Trooper Stan Scott, 3 Troop, 3 Commando does mention Major Schmidt's shot-up Mercedes staff-car/half-track between the bridges (p.239 and n.12, p.308). However, "I suddenly realized, standing behind this half-track, there was a pong of roasting pork. It was the crew, incinerated." But Lt. Sweeney's 23 Platoon encounter with the vehicle just after capturing the Orne river bridge did not involve any hand-grenades or fuel tank explosions, so ... ???

I remember reading recently, in the last couple of years anyway, an account by a member of 7 Para Bn, which relieved the Ox & Bucks coup-de-main party, who categorically stated that it wasn't a tank. Will try to rack my brain (which shouldn't take too long

) and then have a look back over some of the books it might have been in (which might take a little longer!).

Anyway, I'm sure I've read that the on-fire tank/half-track/car/whatever was south of the bridge in the village of Benouville, and so wouldn't have been noted by photographers at the bridge.

Hi, the vehicle destroyed during this night belonged for sure to the 1./Pz.Jg.Kp.716. A Marder I. What ever the people says, it can't belong to 21.Pz.Div (Pz.Rgt.22, Pz.Gr.Rgter 192 or 125), even less from s.Art.Abt.989. One zug (3 vehicles) of 1./Pz.Jg stayed within the limit of Cresserons, the other two being sent towards Benouville. It was just a night probes and not an attack. After the destruction of the first Marder, the remains withdraw first in Le Port, before to moved toward Bieville.
Top

AETIUS 1980 wrote: ↑
04 Jun 2021 21:15
Hi, the vehicle destroyed during this night belonged for sure to the 1./Pz.Jg.Kp.716. A Marder I. What ever the people says, it can't belong to 21.Pz.Div (Pz.Rgt.22, Pz.Gr.Rgter 192 or 125), even less from s.Art.Abt.989. One zug (3 vehicles) of 1./Pz.Jg stayed within the limit of Cresserons, the other two being sent towards Benouville. It was just a night probes and not an attack. After the destruction of the first Marder, the remains withdraw first in Le Port, before to moved toward Bieville.

Ok, so Just One Marder I was destroyed, or two ?
Top

Just one in Le Port hamlet (part of Benouville), 3 others were captured on June 7th in Cresserons. The other 6 withdraw to Caen and were still part of 1./Pz.Jg.Kp.716 on August 15th!!!!!!
Top

The skirmish which took place during the night of June 6 and which cost the life of the Kp of 1./Pz.Jg.Kp.716 (sf) is the work of this company. No movement of armored vehicles from the 21.Pz.Div will take place on the 6th or 7th on the west side of Benouville. For the eastern part of the Orne, Ranville village, there are again many difficulties involving the Pz. Rgt.22 or StuG.Abt.200. The poorly coordinated attacks that will take place until June 16 without success, the barrier of St Honorine la Chardonnette and Escoville being a real breaker.
Top

AETIUS 1980 wrote: ↑
10 Nov 2021 18:25
The skirmish which took place during the night of June 6 and which cost the life of the Kp of 1./Pz.Jg.Kp.716 (sf) is the work of this company. No movement of armored vehicles from the 21.Pz.Div will take place on the 6th or 7th on the west side of Benouville. For the eastern part of the Orne, Ranville village, there are again many difficulties involving the Pz. Rgt.22 or StuG.Abt.200. The poorly coordinated attacks that will take place until June 16 without success, the barrier of St Honorine la Chardonnette and Escoville being a real breaker.

StuG.Abt.200, was no where near Normandy according to this, are we referring to something different ? 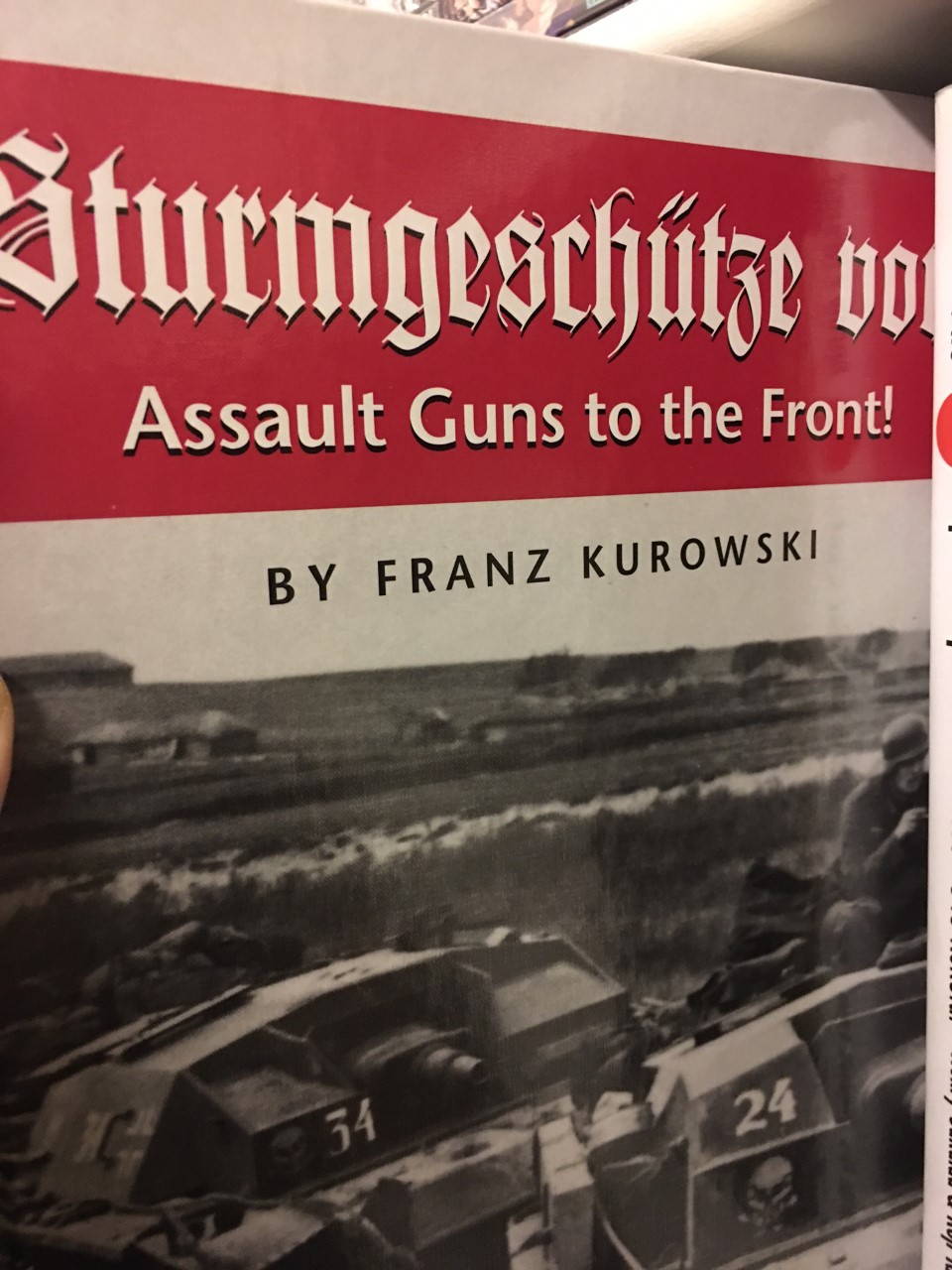