Discussions on all (non-biographical) aspects of the Freikorps, Reichswehr, Austrian Bundesheer, Heer, Waffen-SS, Volkssturm and Fallschirmjäger and the other Luftwaffe ground forces. Hosted by Christoph Awender.
391 posts

There was mention of this differing, for NA though, Presumably a SMG would be part of that at some point.

Also I believe this was a a bit different for Different units ? 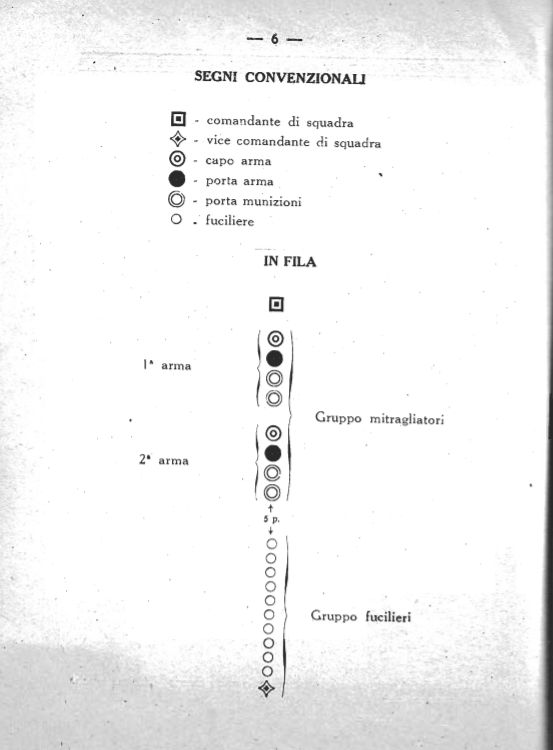 I dont believe we touched on the Kampfpistole, or the allied equivalent Flair guns or signaling guns, the later I am a bit vague on, what were the most commonly fielded models for the US and British?

Who was issued them, were they to be found at the Platoon Leaders level or the squad level, or were there other signaling devices to be had ? 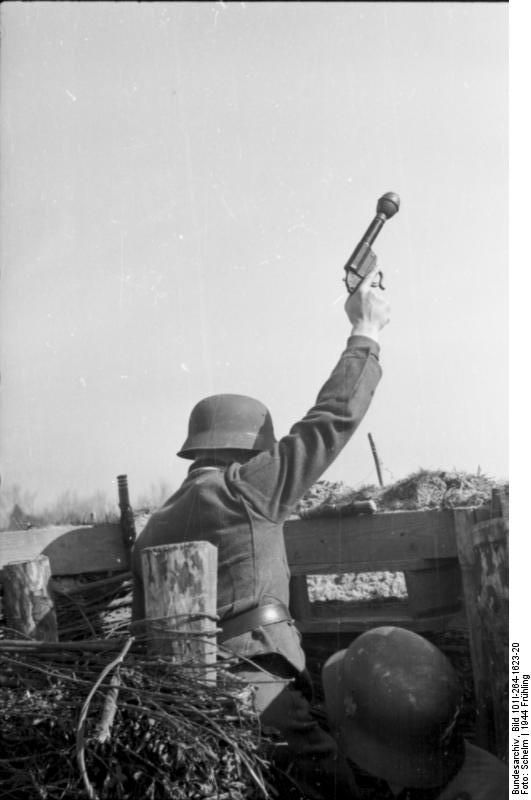 Issues for signal pistols look to have been varied from army to army. The British Army looks to have had a couple of different types, the No.1 MkIII, or the 1-inch No.1 (MkIV or MkV). I don't think I've seen any contemporary information on them. Rounds fired included illuminating, green and red. They were available to Inf Bns, and I think other infantry units types (it is hit and miss whether they show up on WEs), and in the 1943-45 Inf Bn suggested distribution was one per Rifle Platoon and Rifle Company HQ.

Later period German Inf Bns had the Leuchtpistole on similar scales (Coy HQ, each Pl and th MG or Mortar Gp if present). I've come up a bit blank on US Army signal pistols. I'm sure they were issued but I've not seen any examples of allocations to infantry units. There was an item named 'projector, pyrotechnic, hand, M9', and another, the 'projector, signal, ground, M4'. These were both fairly simple tubes, with no trigger, being fired by striking the base firmly against the ground or suitable surface.

Thanks Gary, so it definitely seems they were around, and while there certainly seems plenty of evidence to suggest that the Kampfpistole was used it would be a bit of a stretch to say that it was ubiquitous ? Given the mention of the Leuchtpistole and that is not one in the same?
Top

On another topic, it would Seam the PIAT Team, and the PIAT operator in particular, had different weapons allocated to them, at least from photographic evidence, Thompson's, in NA and Italy, and Stens and Rifles in NW Europe, often I sea Side arm as well? 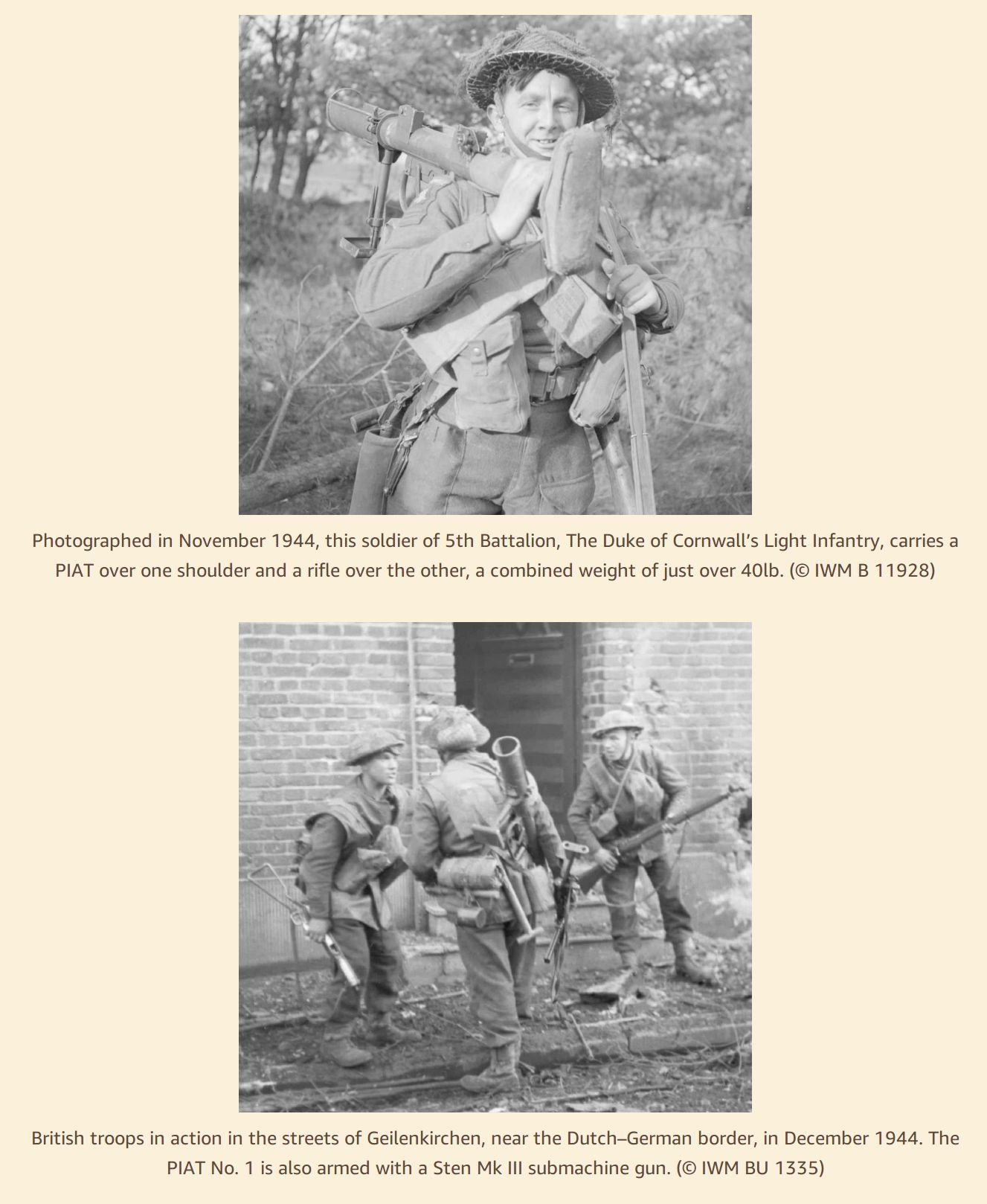 Some time ago Gary Wrote:

The Rifle Section of a British Para Bn followed the same basic format as a Rifle Section in an Inf Bn described earlier. The Sec commander was a Serjeant and the Gun Group was lead by a Corporal though. There's no reliable official scale for Para Bn small arms issues afer 1942; LMGs and other support weapons are detailed in establishments but pistols, Stens and rifles are omitted. The 1942 strength authorised 2 Stens, 6 rifles and 2 pistols for a 10-man Sec, the later being one for the Bren gunner and the other for the 2-inch mortar-man. This was the modified weapon and is only shown as being provided with smoke and illuminating rounds, not HE. By 1944 each Para Rifle Sec was to include one rifle with telescopic sight.

While that seems straightforward(ish) Para Bns carried a pool of Sten guns for allotment as required, which by 1944 meant 300 over and above those already allocated to personnel as standard. A Para Rifle Sec could then replace any number of its rifles with Sten guns if deemed appropriate.

Below Suggests a different take, the 2 inch allotment is not one per Squad, but one per Platoon ? Also we know each Squad had a rifle with Optics in 44, Thought's? :

The infantry section, the basic tactical unit, had a fire group based around a Bren gun and a group of riflemen to close with the enemy. The issue rifle was the No. 4 Mk 1 Lee-Enfield, a bolt-action weapon with a ten-round magazine and a 500m effective range, while section commanders carried the Sten, a submachine gun with a 32-round magazine and an effective range of 100m. The Sten Mk V was introduced in the spring of 1944. Every platoon had two snipers equipped with telescopic sights on their Lee-Enfield rifles. The section second-in-command commanded the Bren gun team, comprising a gunner and loader. Each platoon headquarters had a 2in mortar that could fire high-explosive, smoke and illuminating rounds to a range of 460m, and one PIAT. The 3in Mk II mortar fielded by the battalion’s support company could throw a 4.5kg shell 2,600m.

I had a check re the kampfpistole, I've not come across any info on its allocation (theoretical or actual).

Re the armament of PIAT crew, there was no dedicated crew for PIATs in Rifle or similar Companies. When they were introduced to the Infantry Battalion in mid 1943, three were authorised for each Rifle Company. It was up to the Company to decide how to allocate them, though the scale of issue allowed for one per Rifle Platoon. Within a Rifle Platoon the commander would again decide whether it was added to the burden of a particular Rifle Section or kept at Platoon HQ, which would mean pinching one or two men from among the Rifle Sections. With no standing crew provided there was no particular personal weapon indicated for gunner and assistant, and it would be feasible for units to make their own arrangements in that regard. Sidearms were largely limited in issue to officers and crews of AFVs in standard units and formations beginning in mid 1943 (Airborne and Commando units had separate scales); there was a brief spell in 1942 when Bren gunners were to be issued a pistol, which likely had little chance to come into effect before the Bren gun became classed as an individual weapon in 1943.

Re the snippet from the 'British Airborne Soldier...' title, I would respectfully disagree with the description, as the Rifle Platoons of Parachute (and Air Landing) Battalions were not clones of the standard model. There is no reference to a Platoon HQ level 2-inch mortar in the Parachute Rifle Platoon in any of the four WEs issued from Sep 1941 to Mar 1945, all excepting the first showing one 2-inch with each Section instead. Someone kindly photographed the WE for the postwar 1946 Parachute Battalion for me a while ago, under which the unit had largely adopted the same organisation as a normal Infantry Battalion, including the standard Rifle Platoon. Likewise the 1942, 1943 and 1944 WEs authorised one sniper rifle per Section, rather than two per Platoon (which was the case for Air Landing Platoons). I've also recently concluded that the 3-inch mortar had a far more complex history regarding marks and range than can be easily summed up...

As always Gary thank you very much for your help, and for clearing that up.
Top

The caption Below is a tad confusing, and seemingly contradictory, as afik, the only AP round was actually the HEAT round, and afik, that was rather rare late war as it was considered to be largely useless by that point, and the most common round for it was the HE round ? 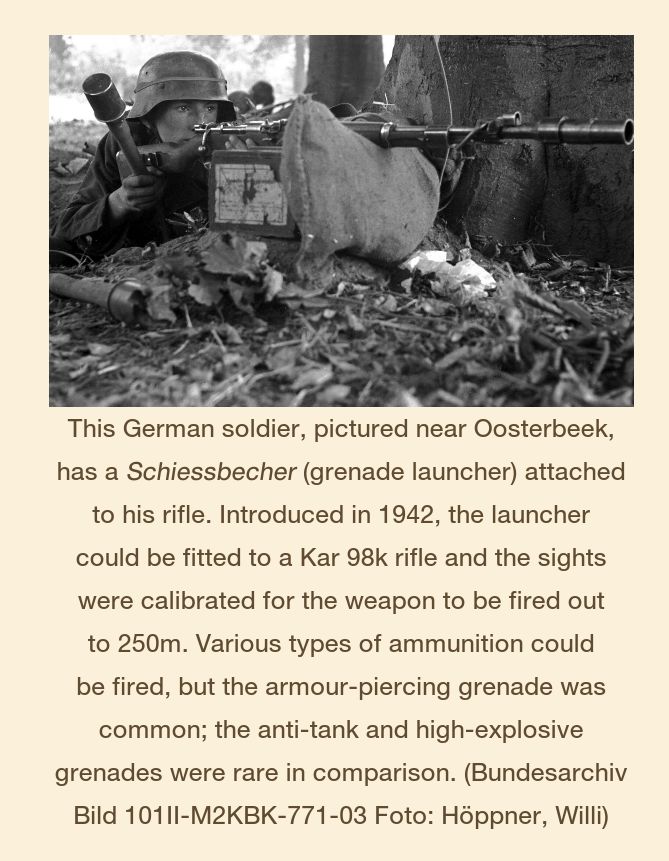 On Another Quest, These did not see service in France afik (Correct?), but I had thought they were still around late war for tackling light armor, or were they as suggested bellow withdrawn from service in NW Europe late war ? (Not to be Found IN NW Europe in 44/45)

The No.68 AT rifle grenade was the first British weapon to employ the shaped-charge principle. Fielded in the summer of 1940, at just under 2lb this was the heaviest rifle grenade employed in World War II. It was fired from a 2.5in cup discharger, and was fin-stabilized. The warhead had a poorly designed cavity, lacking any form of stand-off, and its flat nose degraded its accuracy. Regardless of its poor design, its ability to penetrate armour was considered remarkable in 1940. It was withdrawn from service when the PIAT was issued. 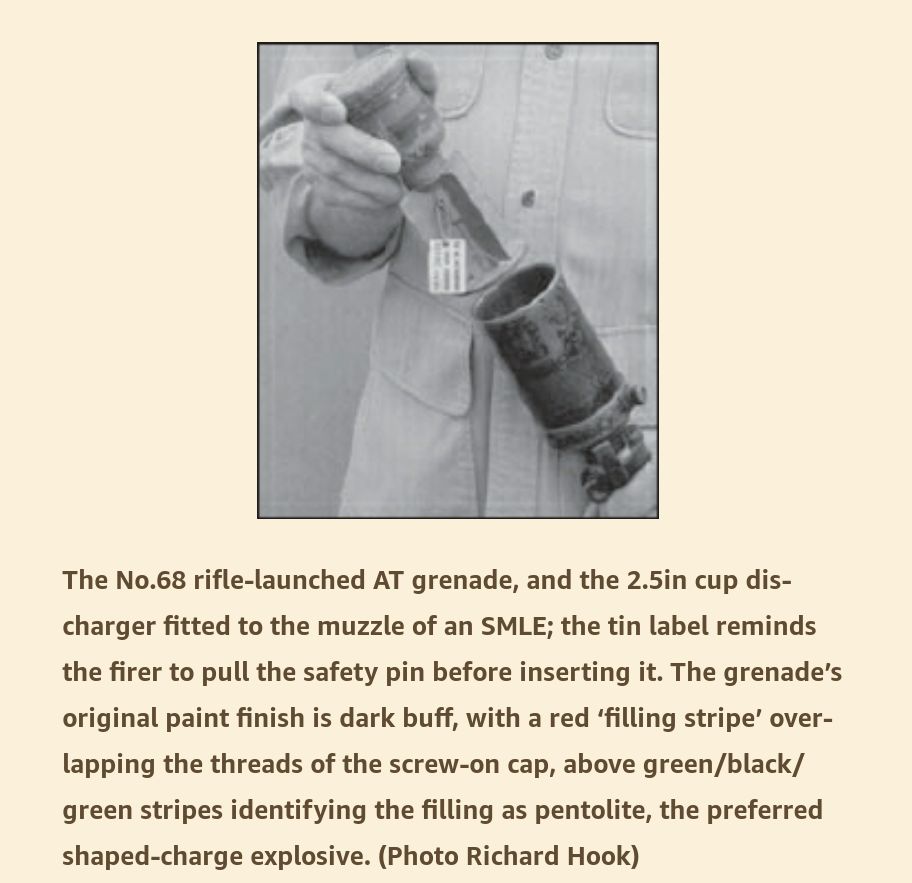 I ask in part because I dont really Trust Osprey, I have always viewed there books as a sort of cliff notes take on history
Top

My understanding re the No.68 grenade is the same; introduced post Dunkirk/BEF but withdrawn from units by the time 21 Army Group made the return journey. They are not shown in the war equipment table for the Infantry Battalion of mid 1943. There is somewhere a May 1944 War Office letter detailing the authorised issue of grenades of all types to units and HQs that sadly I've never got me mitts on.

There was quite range of rifle grenades used by the German Army, and looking back at my old notes I recall the difficulty of telling them all apart. The HE model was the gewehr sprenggrante, and could be fired from a rifle fitted with the schiessbecher (cup) attachment that I think is in the above photo. It could also be armed and thrown in a similar manner to a normal hand grenade. There were at least four types of anti-tank grenade fired by the same device, plus smoke, flare and 'blinding' ones. According to the US Army's TM-E 30-451handbook all four AP were hollow charge. I don't know about the rarity of certain types?

- How were these then Allocated, as part of the Rifle Platoon HQ ?

- AFIK they only had HE rounds ? 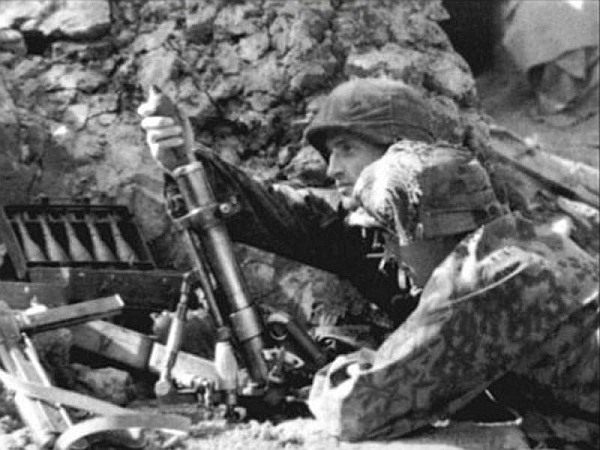 - Were these then Allocated in the same manner as the 5 cm above had been, would they be found in the Rifle Platoon's HQ Element ?

- Presumably they Fired the Same array of Bombs as the 8 cm Granatwerfer 34 ?
Top

Regarding the British and their use of the Boys, in 1944 each ammunition section in each mortar detachment had a Boys, these were carried in the sections 15 CWT truck which gives a total of three per mortar platoon

Was this true of all formations including the Para's ?
Top

That's a misconception re the Boys still being used in 1944 I'm afraid. When the 'British Army Handbook' by George Forty was published it included a few organisation tables taken from WW2 era British Army publications. The one they chose for the 3-in Mortar Platoon was that from the first version of Infantry Training, Part IV - The Mortar Platoon, dated February 1943. That reproduced the organization as seen in the 1941 WE, which included the Boys, and as the book was for a long time the only readily available source on British WE information I suspect a few people have assumed it represents the Mortar Platoon as of 1944 (which I think it's captioned as?). The Boys was replaced by the PIAT in the Mortar Platoon, one for one, and the Platoon was slightly reorganised from the scheme shown in the 1943 manual and the 'Handbook' under the 1943 WE. The 3-in Mortar Detachment of the Motor Company (actually two 3-in mortars) had a PIAT on its single 15-cwt truck in the same manner, as did the Mortar Troop in the Recce Regiment. Mortar Platoons in Parachute Battalions had enough to carry without adding a PIAT, and of course, no 15-cwt truck!

Okay, well that certainly makes a lot more sense, I mean if it were removed from every other single unit by 44,why would it be left in the one that would probably never ever use it anyway…

Thanks for clearing that up Gary, the source by Forty never really sat well will me, why would they give them Boys, I will amend my site and change them to PIATs.
An American friend warned me about George Forty years ago, he reckoned that his US Army handbook was full of errors, but I thought it was sound, and now this error in the British handbook.