The use of radio in WW1

Discussions on all aspects of the First World War not covered in the other sections. Hosted by Terry Duncan.
27 posts

As far as the RAF was concerned they were using a number of different Wireless Telegraphy and Telephony equipment for various tasks by 1918. The minutes of a conference held at HQ RAF In France on 18 July 1918 (UKTNA AIR 1/725/97/1) listed the following:
ww1wireless003.jpg
ww1wireless002.jpg
It was a big change in both numbers and in improved technology of what the RFC/RNAS had used pre-war and early war. However, throughout the war there was a limit on the number of sets that could be used in 'close' proximity in the air (this also applied to use of wireless on the ground as well) due to 'self-jamming'. Various technologies were introduced (including the clapper-break) to increase the number of sets that could be used in an area but it was not totally solved.

Hi
For those interested, the British official document S.S.191 'Inter-Communication in the Field' dated November 1917, has the following relating to Wireless use:
WW1wireless014.jpg
WW1wireless015.jpg
Another document, S.S.537 'Summary of Recent Information regarding the German Army and it's Methods' of January, 1917, has a summary of German wireless during 1916 as follows:
WW1wireless016.jpg
A useful article available on-line on British Army wireless, including images of sets and valves. is 'Army radio communication in the Great War' by Keith R Thrower.

I hope that is of interest.

Aircraft and Tank communication with Wireless Telephony was experimented with and tested during WW1 by the British, noise inside the tank and the aeroplane was a problem for receiving clear messages, as was the short range with telephony as well as interference from thunderstorms. What aerials to use was also a problem, the whip aerial based on a fishing rod wrapped with copper wire was considered better than others, as in this report:
ww1wireless005.jpg
ww1wireless006.jpg
ww1wireless007.jpg
ww1wireless008.jpg
This system is not to be confused with the Signal Tank, which used aerials for ground to ground communications, aerial arrangement below:
GB-MkI-Wireless.jpg
I hope that is of interest.

not to drift topic
IIRC
early WWII French tanks had few or no radios, which was part of the reason for their poor performance.
remember, the tech of the time was tube based. much bigger and more fragile than modern transistor and digital stuff.

seems to me that, like planes and motor vehicles, WWI radio gear was clunky and inefficient. what a difference twenty years made.

(pic is from this article
https://www.livescience.com/45641-scien ... tions.html
not much specific info in.
pic caption: "A U.S. Army portable radio transmitting station in Germany, 1919.")
You do not have the required permissions to view the files attached to this post.
Saint Peter, let these men enter Heaven; they served their time in hell.
Top

Aerials could be problematic as they were highly visible in many cases, however, they did 'shrink' during the war although the performance of the set would be more 'limited' in some respects and more specific for certain tasks. Below a postcard (found on-line) of the Marconi Pack Wireless which is dated as 1910, in use on a British Army exercise (local civilian photographers would take photos of the exercises and sell them as postcards):
1910MarconiPackWireless.jpg
The RFC receiver set used by the RFC also had a tall aerial (about 30 feet), these were based near artillery batteries to receive artillery corrections from aeroplanes, messages were sent to the aircraft via signal lamp (as seen here in a 1915 training image from the RAF Museum collection) or ground strips. During the Battle of Messines (1917) the RFC tried out two way Morse sets so aeroplanes spotting for long range artillery so the machine did not have to fly back over the artillery battery. This became standard from the spring of 1918 when Bristol Fighter aircraft were attached to a RFC Corps squadron in each BEF Army squadrons to support the long range guns. During 1918 these aircraft became independent Flights (L,M,N,O and P Flights) with the RAF.
cpgrd 550.jpg
The 'Loop' set mentioned and described in the S.S. 191 document in a previous post had this type of aerial (IWM):
WW1loopsetaerial.jpg
The actual power source for the wireless sets were also a major source of 'weight' and therefore mobility, generators have been seen in previous posts, these were not much good to move forward at lower level formations, particularly infantry, dry cell batteries and accumulators were also used. These would also have to be carried forward, usually by pack horses or mules, and alongside the self-jamming problem was a major reason for lack of wireless in companies and platoons during WW1

I hope that is of interest.

Interesting. Thanks for explaining how it all works. It makes sense to me now.
Top

Hi
Below is a captured and translated report reference 'problems' with German ground wireless reception stations during July 1918, which may be of interest.

Mike
WW1wireless019.jpg
You do not have the required permissions to view the files attached to this post.
Top 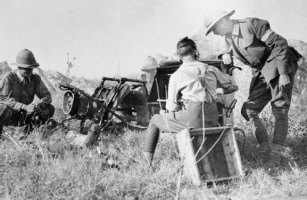 Fantastic posts, thank you to everyone who commented. Tons of really fascinating information.

In short it seems that radio sets during the First World War were still very clunky, large, and fragile, and required a large and equally clunky generator to operate..? So moving them forward with advancing troops at the spearhead of an attack was essentially impossible.

I'm not much of a tech person, so forgive some dumb questions. It seems like some radios linked here have a tall 'mast', while others do not. Was there a reason for this? Was it just an entirely different form of transmitting technology, or did the mast just provide extra range?

And I suppose then that radios in aircraft were more feasible because they weren't subject to the chaotic conditions on the ground, for the most part.
Top

They used long-wave broadcasting transmitters (they didn't know any more useful technology at that time). Long waves require large antennas, otherwise the range is just a few kilometres, so the small antennas were short-range.

I don't think they were especially fragile or clunky - the radio sets were relatively simple, didn't use vacuum tubes so generally, they were reliable.
Top

Receivers on the Eiffel Tower were able to intercept German radio messages at the beginning of the war, so across distances of more than 100 km.

Receiving was easy - many available receivers were extraordinary sensitive (even by today's standards).
The main impediment was the curvature of the Earth.
Top
27 posts