See did 11 years in the marines,had to leave early due to injury.And did a 14 month tour to vietnam,lots of badges and awards,for actual action in vietnam not shure,maybe some where for there.

John Wayne did not serve in Uniform but was on a OSS Mission:
http://en.wikipedia.org/wiki/John_Wayne
Top

Has anyone mentioned Maximillian Schnell?

Not actually sure in what capacity he served in although it says he was with the Swiss Army but his age would have
put him in WWII.

He made some great movies where he usually played a German.
Top

The famous silent film-era ballroom dancer Vernon Castle was a member of the Royal Flying Corps during WW1 and was awarded the Croix de Guerre. He died in 1918 from injuries sustained in a plane crash while training American pilots near Fort Worth, Texas.
http://en.wikipedia.org/wiki/Vernon_and_Irene_Castle
Top

The actor's in PF's post above may not have served, but these actors did: From TV's "Hogan's Heroes". It was earlier mentioned in this thread that John Banner, aka "Sgt. Schultz", served in the U.S Army (at one point he was even used as a model for a recruiting poster) - but I did not see some of his fellow actors listed:

Werner Klemperer, aka "Colonel Klink" - Born in Germany, but fled with his Jewish family to the U.S. He served in the U.S Army during WWII (as an entertainer with Special Services).

Leon Askin. "General Burkhalter" - Austrian-born, also Jewish. Fled to the U.S where he also served in the U.S Army. He wrote instructional manuals for U.S invasion forces. His last rank was Technical Sergeant.

Howard Caine. "Major Hochstetter" - Born in Tennessee, U.S.A. He served in the U.S Navy in the Pacific Theater. 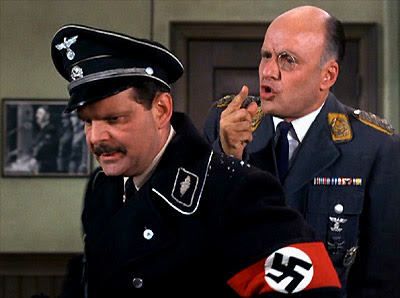 Hannes Stelzer of the movie Stuka (1941) was a real LW pilot who was killed in the crash of his aircraft.

Leslie Nielsen (and his brother also) served in the RCAF during WWII.

Some actors who starred in The Great Escape had been actual POWs at war. Donald Pleasence was held in a German camp, Hannes Messemer in a Russian camp and Til Kiwe and Hans Reiser were prisoners of the Americans, while Richard Attenborough had been a pilot in the RAF.

Hans Christian Blech (Maj. Pluskat in The Longest Day) got his scars while fighting on the Russian Front.
Top

while Richard Attenborough had been a pilot in the RAF.

His war service was spent in the RAF, mostly in their film unit. There he took the lead role in Journey Together. While in the RAF he found time to marry his fellow RADA student Sheila Sim.

...and In Which We Serve, Schweik's New Adventures, and The Hundred-Pound Window, School for Secrets and A Matter Of Life And Death, three of which were made during the three years (only) he was in the RAF, 1944-46 as he wasn't old enough until late 1943.

In most locations you won't even find the word "active" as in "active duty", but he recently opened up to a Telegraph journalist -


The following year he joined the RAF as an air-gunner cameraman. He would fly in the tail end of a Lancaster bomber taking film of a target before a bombing raid and then again immediately after it, having circled in the air while the raid took place. 'The turbulence for me was purgatory in the Lanc,' he says. 'It made me air sick. Do tell me to shut if I go on about stuff you know backwards.'

No, please continue. 'Well, because we were at high altitude we had to wear oxygen masks so I would have to take the mask off to be sick then get it quickly back on so that I didn't pass out, all the time reloading the camera. I wasn't frightened.'

Korean actor Choi Kil-Ho (최길호, September 24, 1936 ~ September 1, 2007) fought in the Korean War as a student soldier. He is noted for his role as a corrupt local governor in a 1971 movie 'Chunhyang-jeon' (춘향전) based on the most famous folk tale in the Korean history. Later he worked as chairman of the Korean Actors' Association for a long time.

Jiang Qing (Chairman Mao's wife), known as one of the "Gang of Four", was an actress in Shanghai in the 1930s. She was with the Red Army in Yanan, northern China in 1938.

She once played the role of Nora in Henrik Ibsen's "Doll's House".

His name is mentioned in previous posts, I would like to add some more: Eddie Albert was considered as a hero and decorated to Silver Star by rescuing 47 marines during the İnvasion of Tarawa.Interesting thing is that, contrary to his shining military background, he very well portrayed a coward company commander who caused death of the GIs by own mistakes in the film "Attack" 1956.
Top

My impression is that this thread is excessively focused on English-speaking actors.

Japanese actor Kato Daisuke (加東大介) who is noted for his role as Shichirōji (七郎次) in Kurosawa Akira(黒澤明)'s legendary movie 'Seven Samurai' (七人の侍, Shichinin no samurai) fought in New Guinea during the Pacific War. Actually, he finished his military service in 1933, but was conscripted again in 1943 and was ordered to set up a military troupe in New Guinea. There he played Hasegawa Shin(長谷川伸)'s 'Mabuta no haha' (瞼の母, 'Mother in my memory) with his fellow entertainers, one of whom, a buddhist monk from Kyushu, became the grandfather of famous comic creator Kobayashi Yoshinori (小林よしのり)

Kato Daisuke in 'Seven Samurai' (on the left)

Based on his experiences in New Guinea, he wrote memoirs named 'Snow falls down on a southern island' (南の島に雪が降る, Minamino shimani yukiga furu) in 1961. In the same year, he played the leading role in the movie based on his memoirs.

He was born in Seoul in 1911, as a son of an ardent Korean independence activist. When he was young, his name was Kim Duk-Rin (김덕린, 金德麟), which he later changed it to a Chinese-style name, Kim Yum (金焰 , Jin Yan). He exiled to China with his father and settled down in Shanghai in the 1920s. In 1919, his famous uncle Kim Kyu-Shik (김규식) went to Paris for the Paris Peace Conference to lobby for Korean independence from Japan.

He volunteered for an fighter pilot when the Sino-Japanese war broke out, but was rejected. He remarried Chinese actress Chen Yi (秦怡) in 1947 and became a member of People's Representative in Shanghai in the People's Republic of China. He was nominated as the First-Rate Actor of China, the highest status of actor in China by Mao Ze-Dong in the 1950s. However, he was persecuted during the Cultural Revolution and passed away in oblivion in 1983. Sadly, he is an almost forgotten figure in today's Korea.

Kim Yum.jpg
You do not have the required permissions to view the files attached to this post.
Last edited by Kim Sung on 19 Sep 2009 00:25, edited 1 time in total.
Top

According to this Russian link, renowned Soviet director and actor Sergei Bondarchuk (Сергей Бондарчук) served in the Red Army during the Great Patiotic War.

...In 1942, I was called into the army and I was soldier until the end of the war. I participated in the defense of northern Caucasus. For another year after the war, I served in a part of the Moscow garrison...

* A rare Soviet film full of humanity, not propaganda


'They fought for the Motherland' (Они сражались за родину, 1975) as Ivan Zvyagintsev

* The films he made tell true stories of people, not ideology. That's why I like his films.
Top
234 posts