Need help with my first Wehrpass

Discussions on Axis documents, postcards, posters and other paper items as well as feldpost numbers.
4 posts • Page 1 of 1

Need help with my first Wehrpass

Hello from a new member!

I have been researching your forum's amazing help for those who have Wehrpasses, and I hope that I might find help with a document that I have.

Any help with understanding to whom this document belonged would be greatly appreciated. Thank you very much! 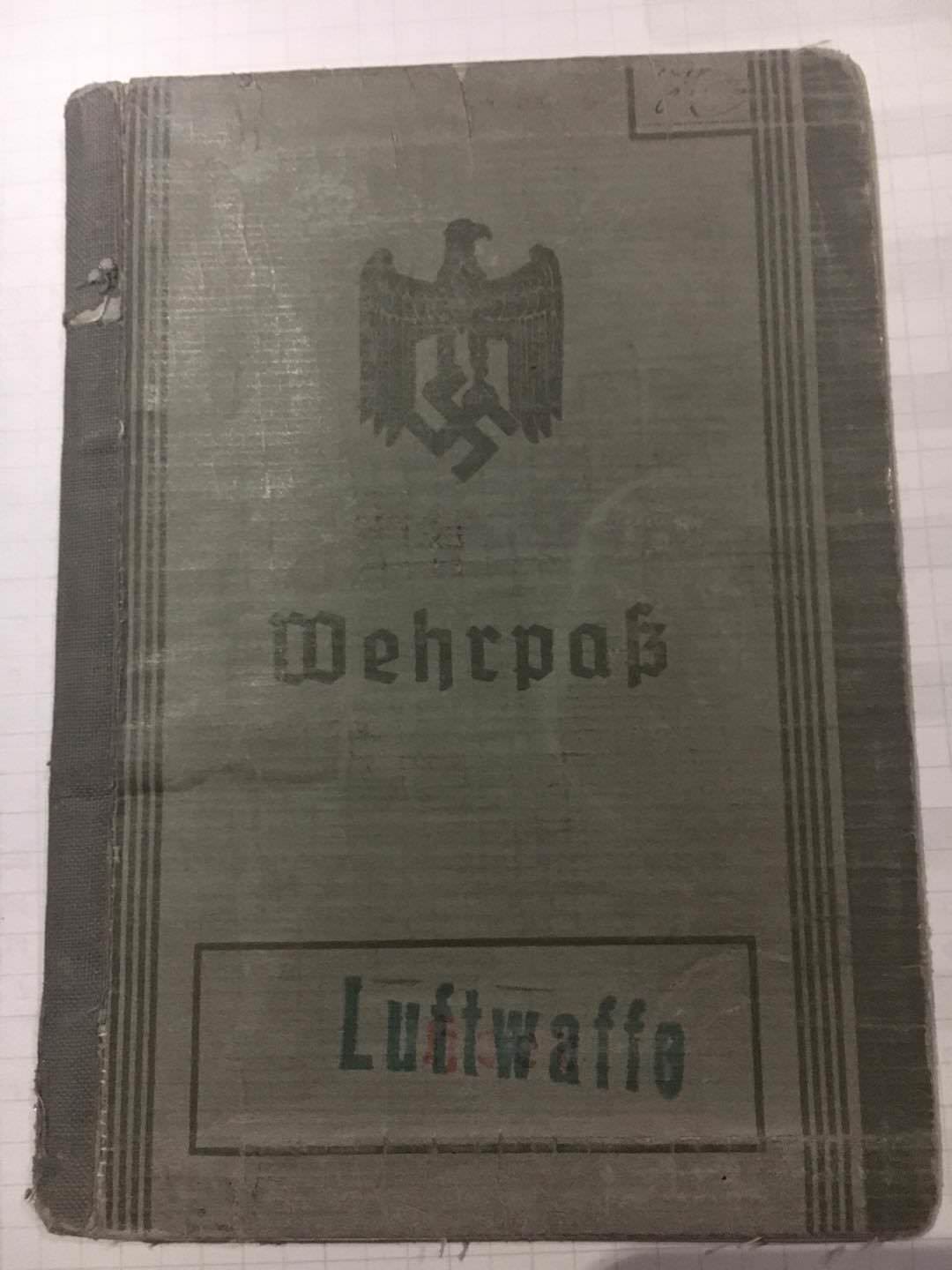 Inside cover and page 1 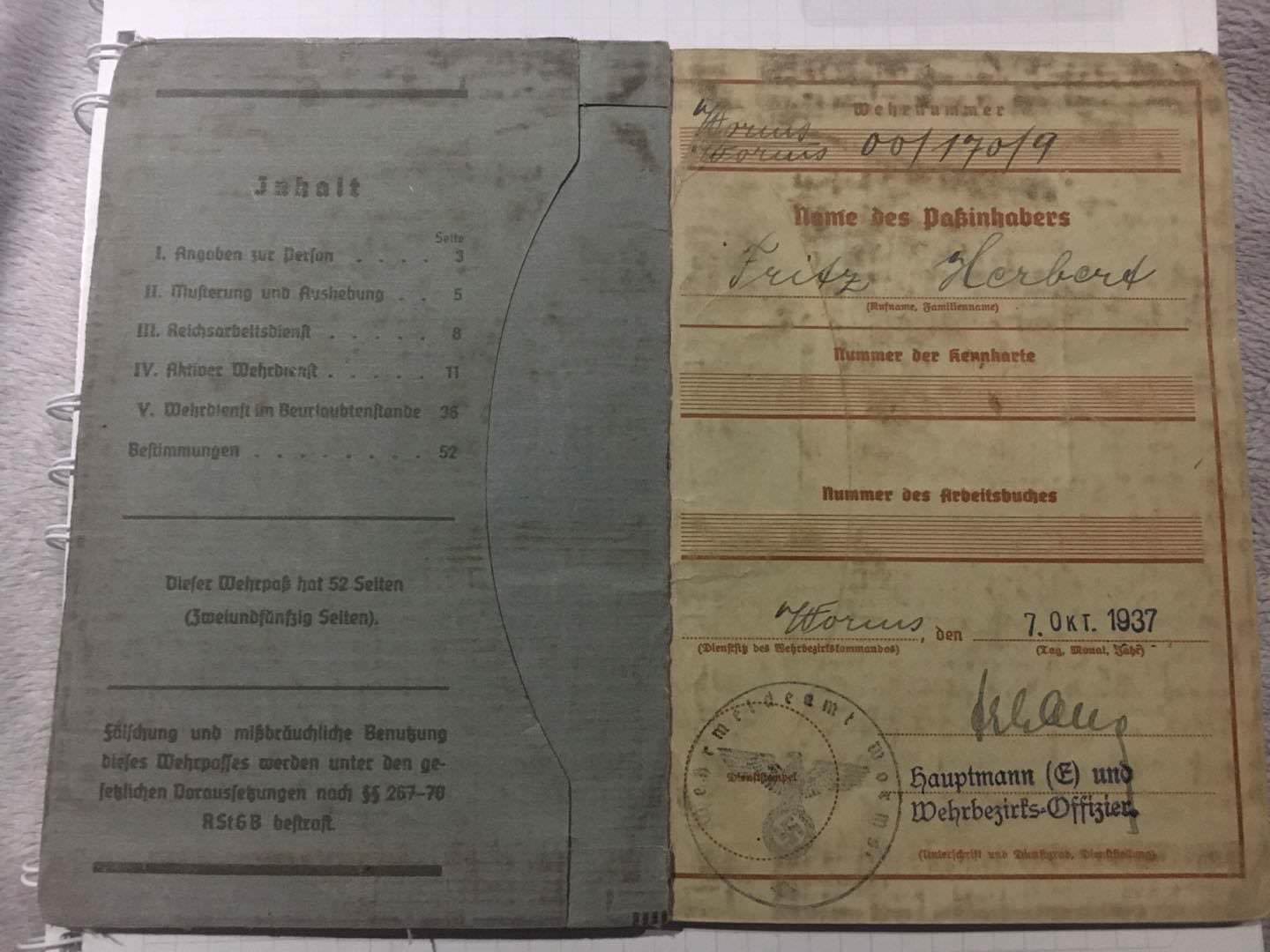 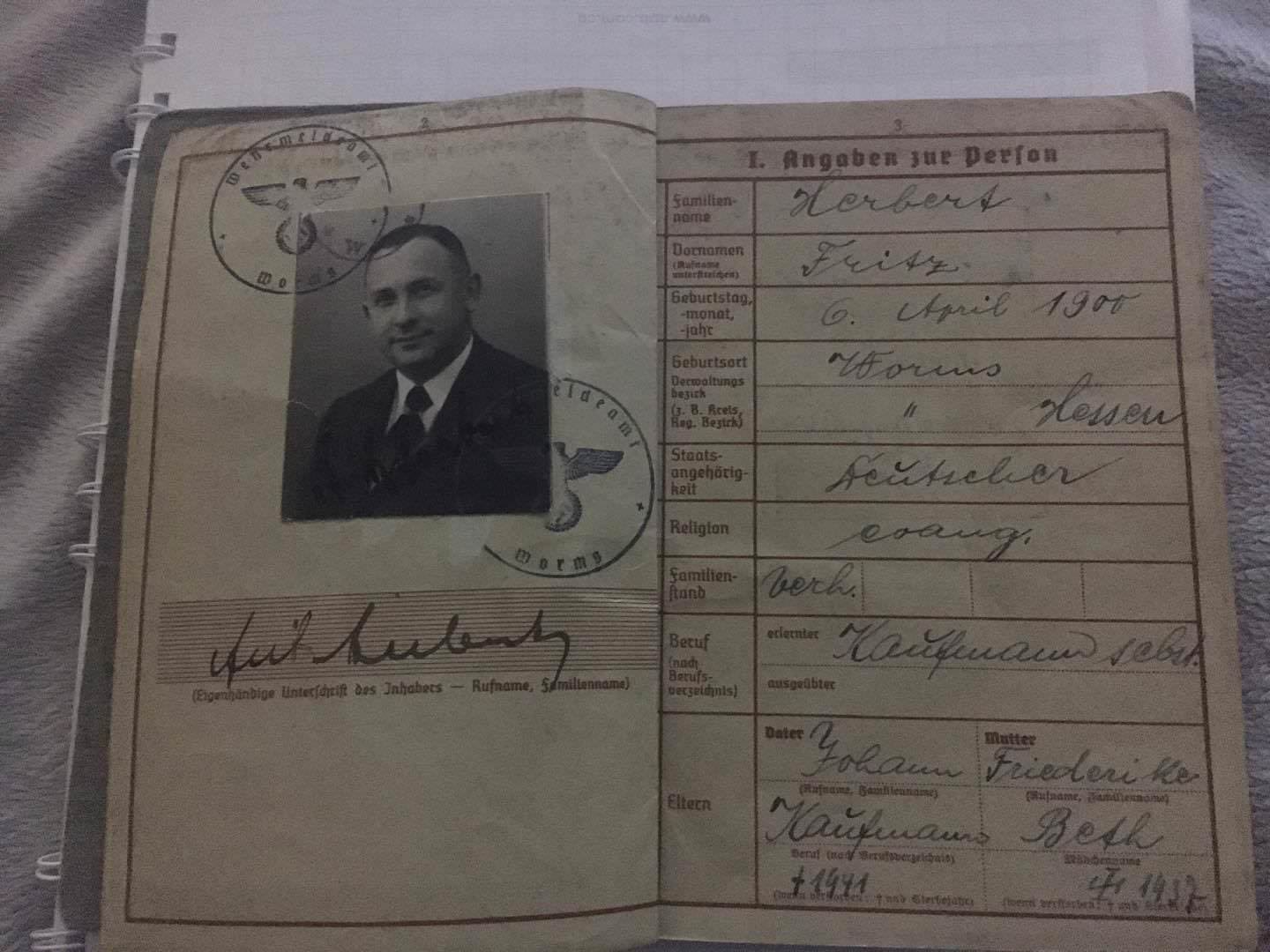 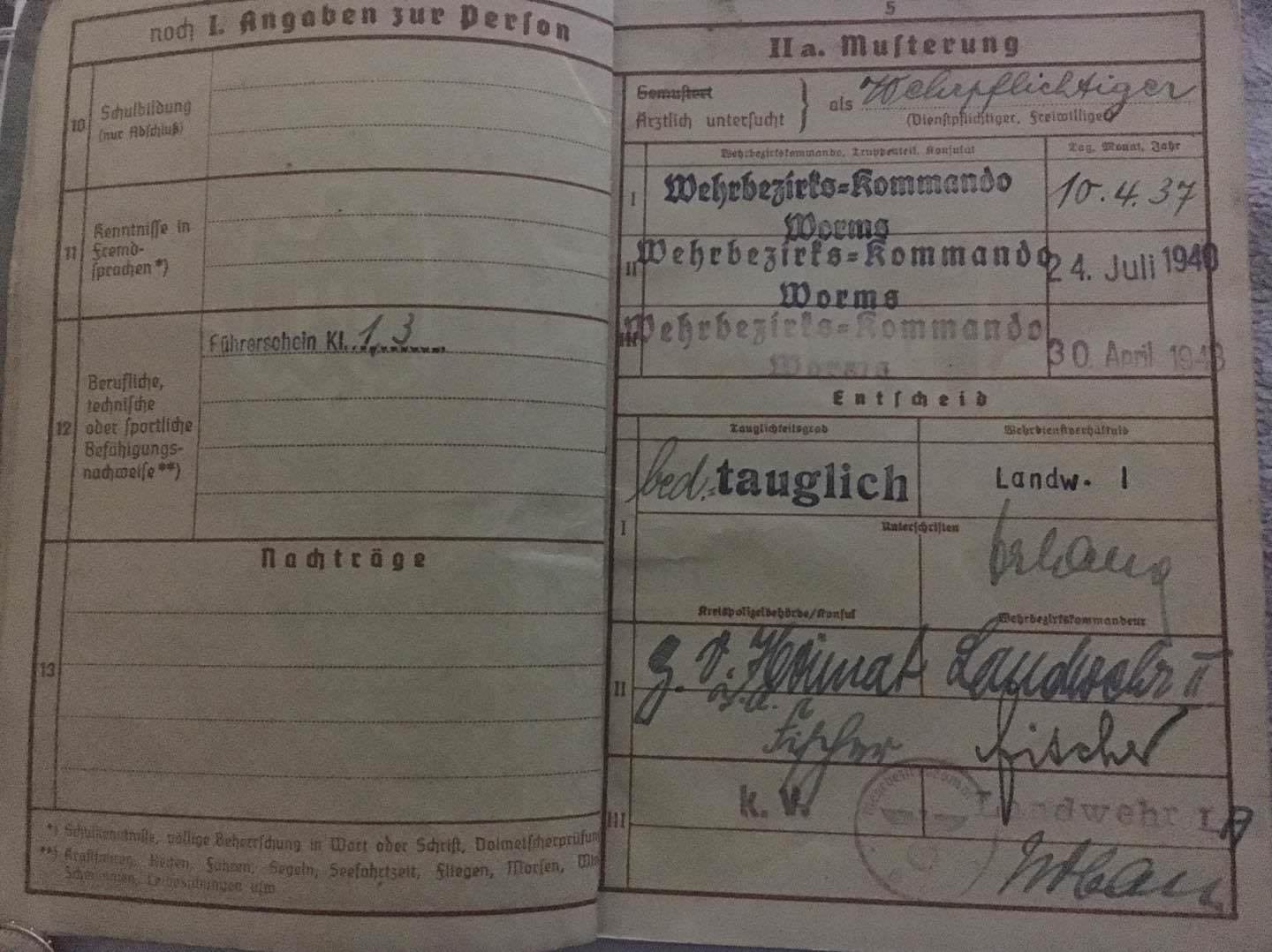 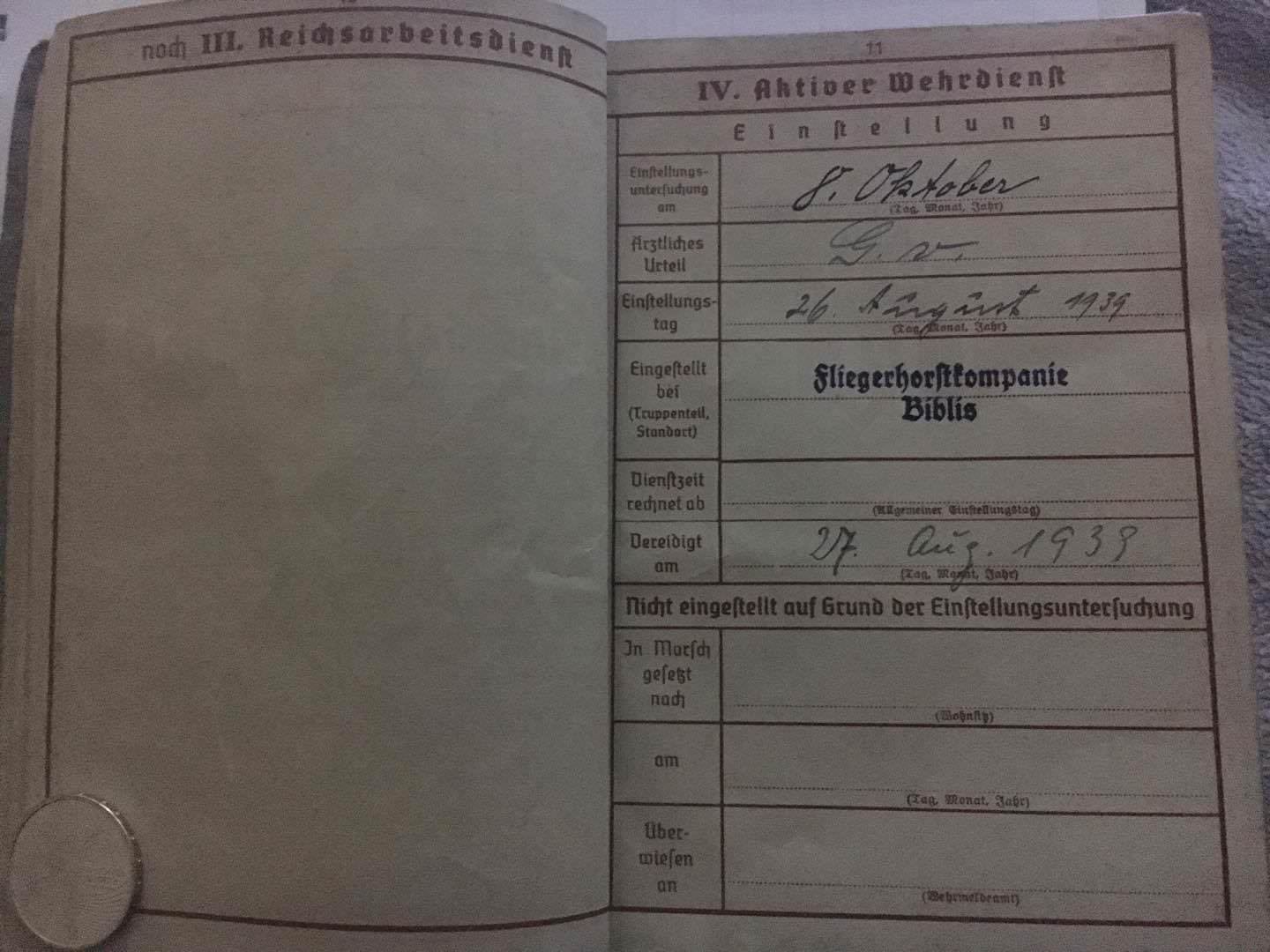 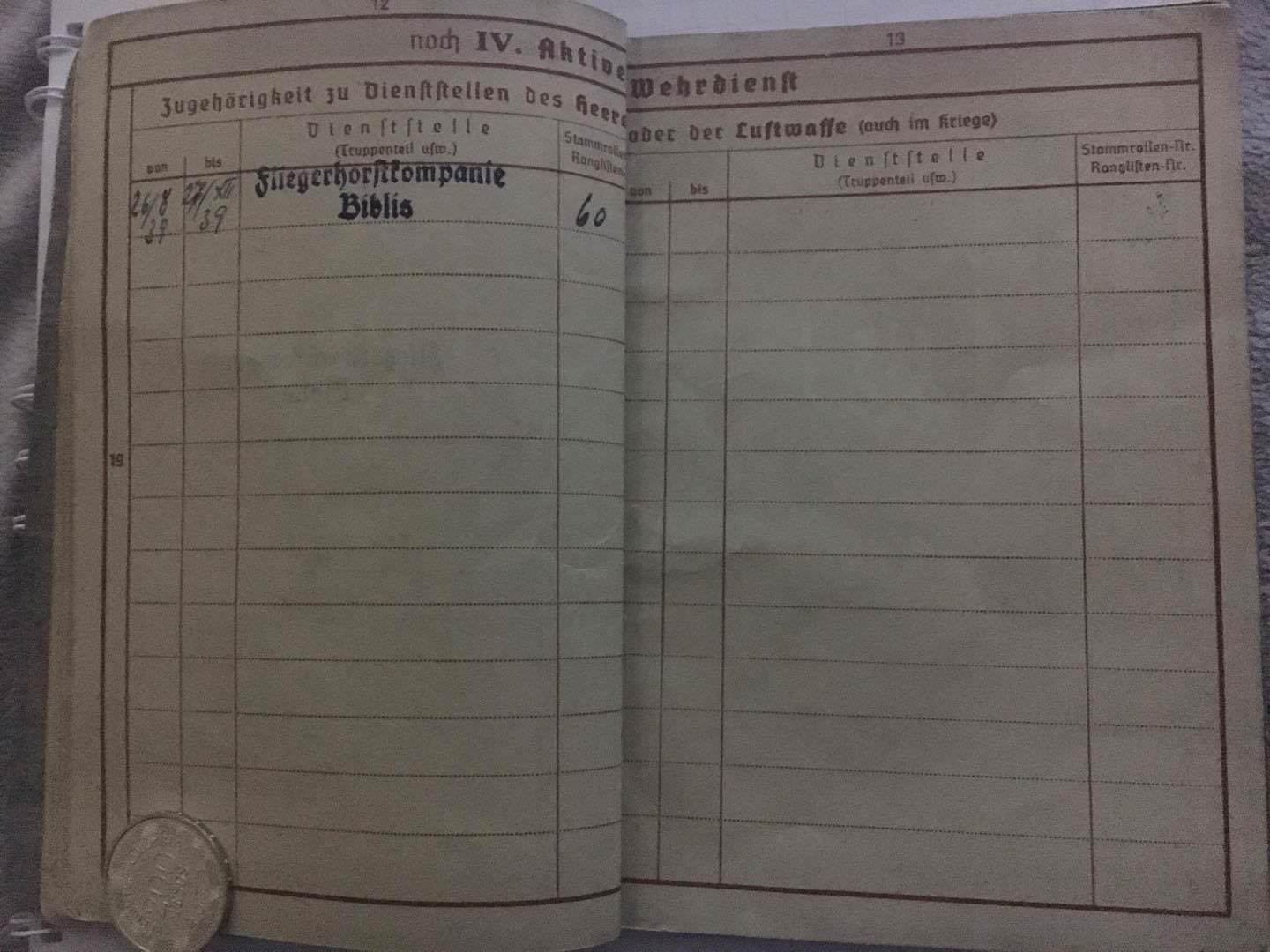 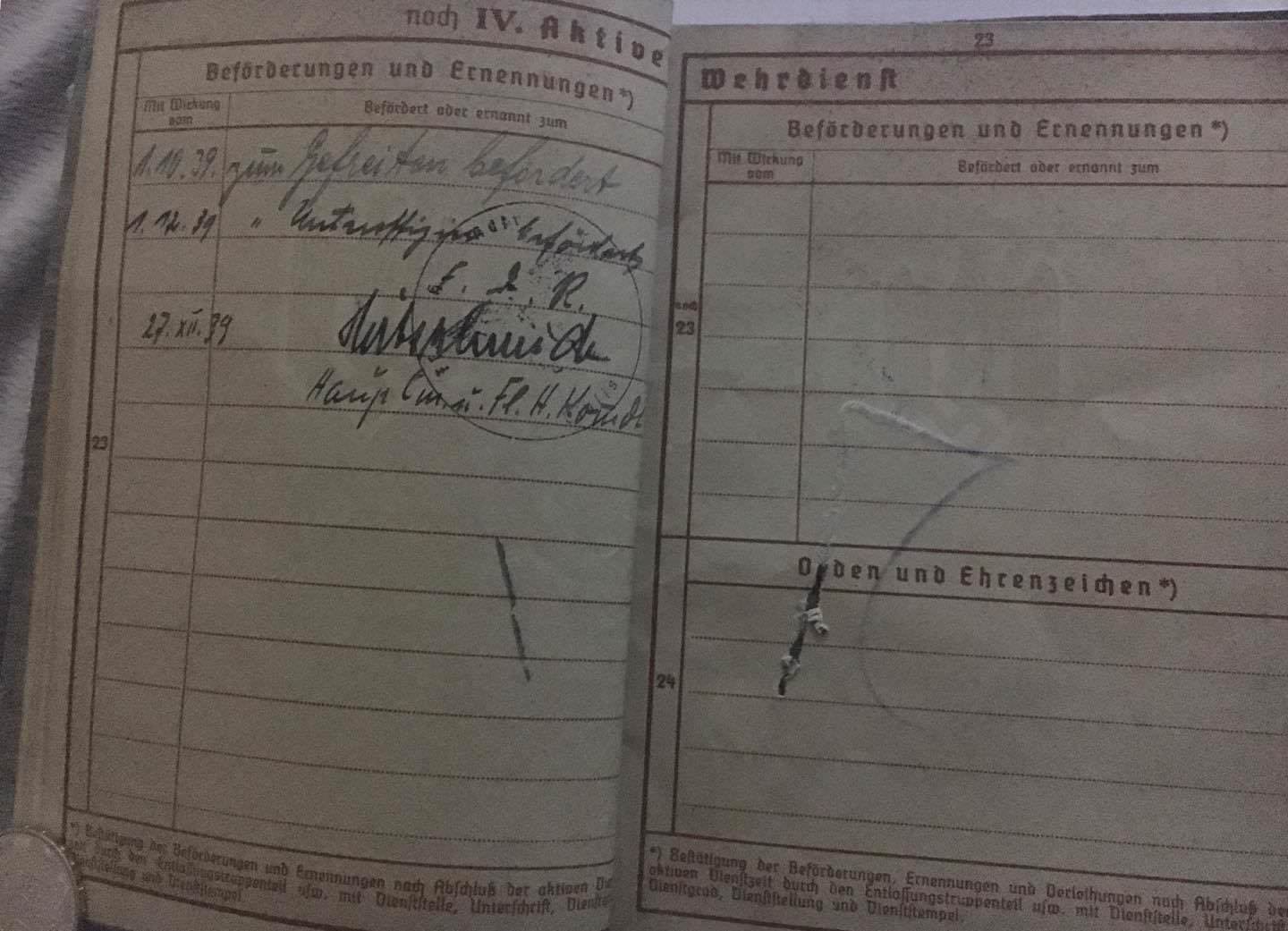 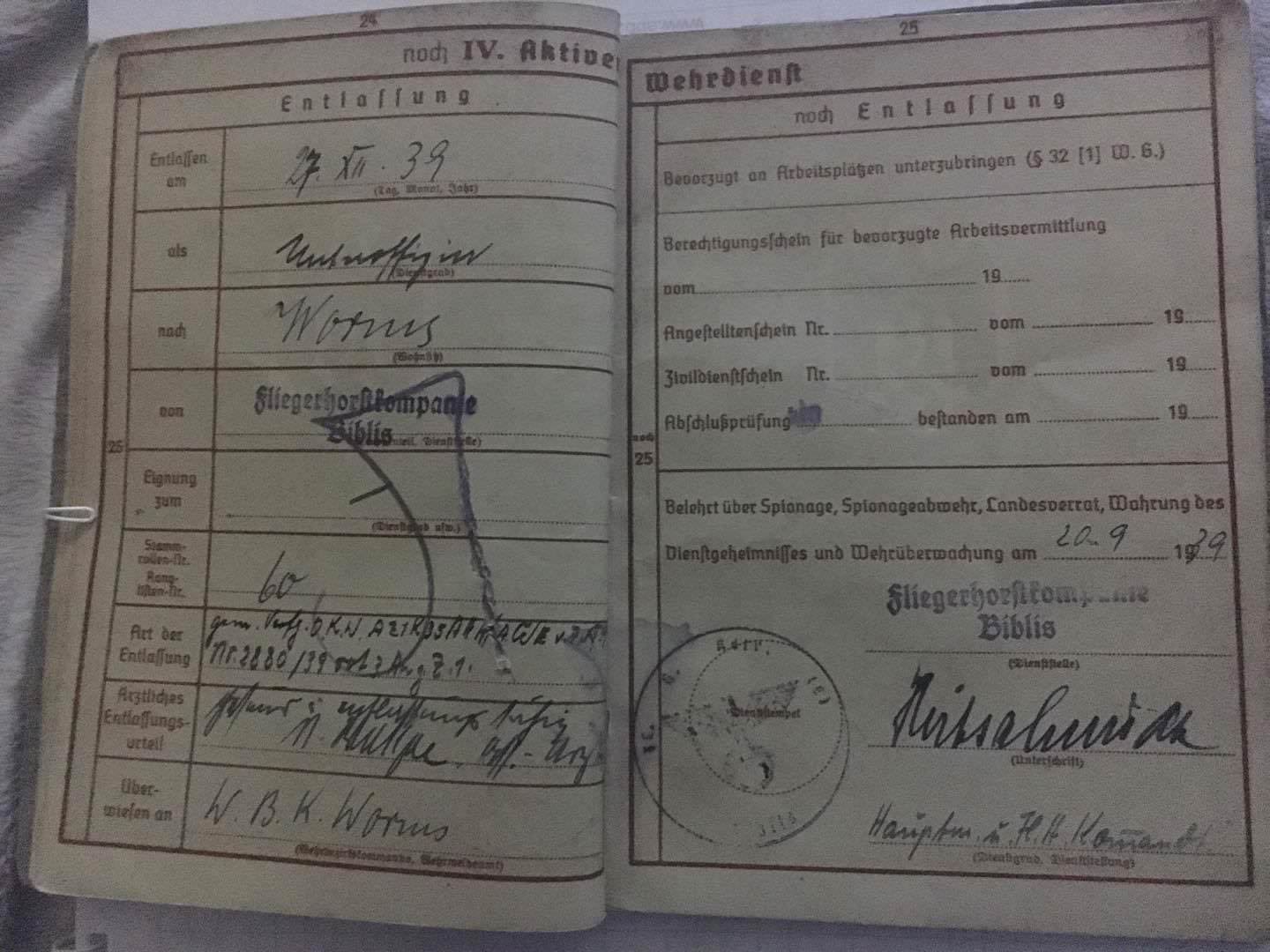 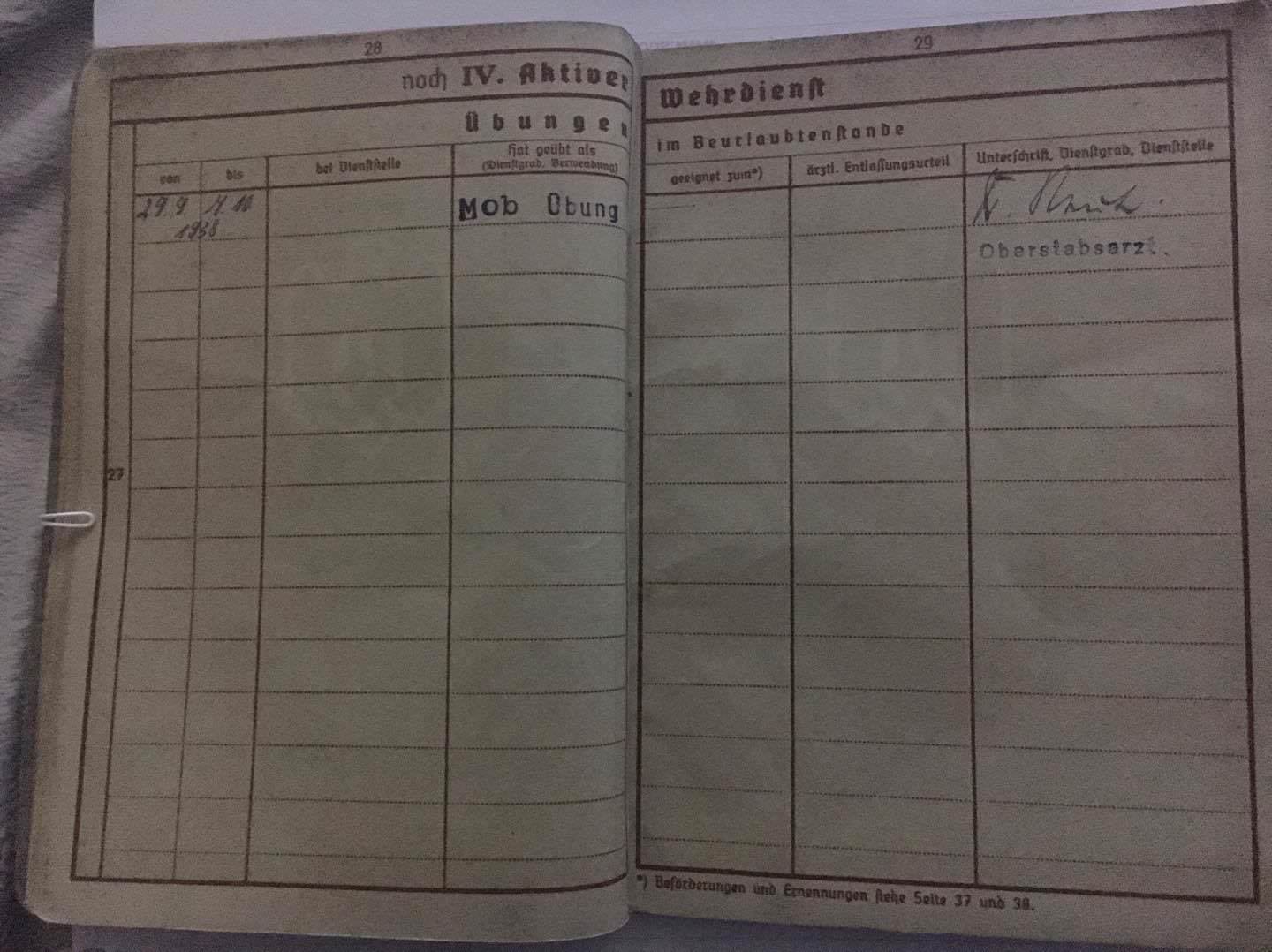 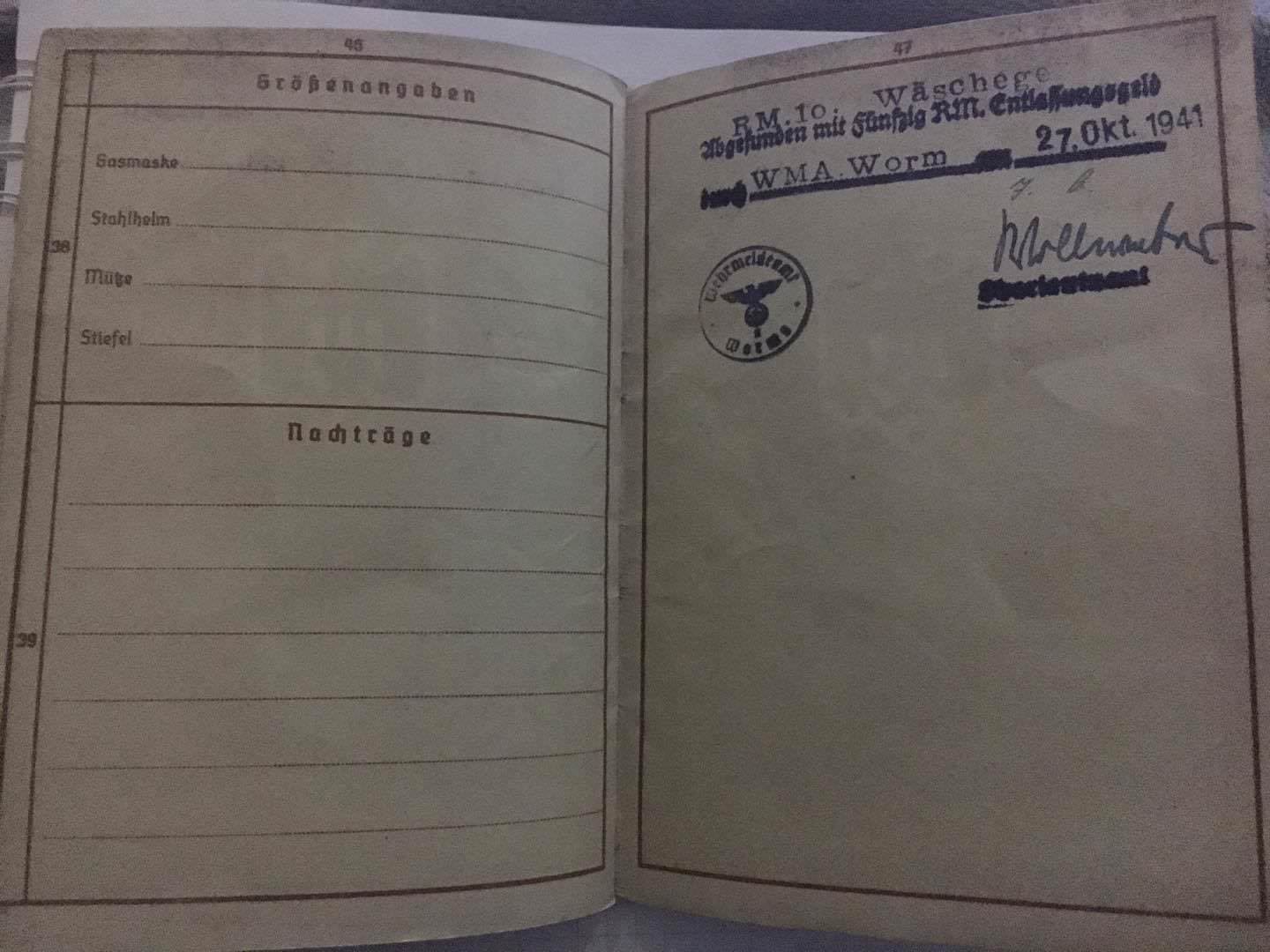 Your Wehrpass belonged to Fritz Herbert, a draftee from Worms. He was born April 6th, 1900, and he was a salesman in civilian life. The Wehrpass was started when he reported for the draft on October 7, 1937. He had a driver's license. He was found fit for limited service, but because of his age, was assigned to the Landwehr (reserves) for local service. He was examined again on 24 July, 1940 and April 30, 1943 with the same findings.

Allocated to the Luftwaffe, he had a practice mobilisation September 29, 1938. He was called for active service on August 26th 1939, at the airfield in Biblis. He was promoted to Gefreiter on October 1 1939, and Unteroffizier December 1 1939. He was discharged from active service apparently for medical reasons, on December 27, 1939. He saw no active service for the rest of war. He received 50 Reichsmarks discharge pay on October 27, 1941.
Top

Dwight Pruitt, thanks for the time you spent translating my wehrpass I am very happy to know more about this character, a warm greeting and thanks again!
Top

I think there are quite a few interesting things mentioned:
1. Page 4: Drivers license class 1 (motorbikes) and 3 (cars until 2.5 t)
2. Page 5: The change of the results of the medical examinations during the years:
1937: bed. tauglich = bedingt tauglich = limited suitability
1940: gv. Heimat = garnisonsverwendungsfähig Heimat = employable at a garrison in the homeland
1943: kv. = kriegsverwendungsfähig = fit for employable in war
3. Page 11 and 22: Active duty from August 26th 1939. Promoted on Oct. 1st 39 to "Gefreiter", the lowest enlisted men rank. But only two month later on Dec 1st to "Unteroffizier", the lowest NCO rank, BUT a jump of four ranks within the rank structure! And there is no hint/information that he attended a training course for future NCO´s.
Top
4 posts • Page 1 of 1