Discussions on the equipment used by the Axis forces, apart from the things covered in the other sections. Hosted by Juha Tompuri
1231 posts

My delivery scenario has always been:

The Germans use a Ju 390 to deliver such a weapon. The target isn't London, it's Moscow. The Soviets have a very primitive air defense warning system that is largely incapable of dealing with a single aircraft target and has essentially zero capacity to deal with one flying at night (eg., they don't have effective nightfighter planes).
The delivery plane takes off and flies at night to Moscow to arrive in the very early morning to deliver its weapon. The biggest problem for the Ju 390 is not delivery, but escape. It's simply going to be too slow to outrun the bomb's effects when it goes off. A possible solution is the bomb is fitted with a drag chute or parachute to slow its decent to give sufficient time to escape.
Using a Gigant only insures that delivery becomes a suicide mission, both in trying to fly to the target, and deliver the weapon.
Top

The idea of a German A-bomb is so captivating to many, that it is one of the best-selling 'What-If' plastic model kits! 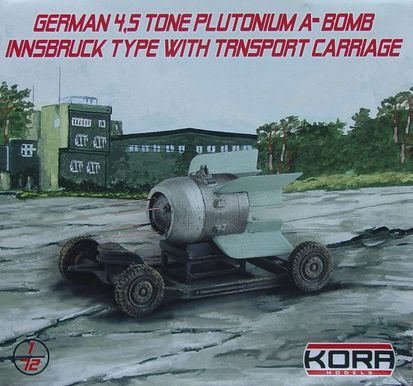 I would buy it simply because of its sheer absurdity, but paints and glue are not provided? At least paints would be nice...
Top

T. A. Gardner wrote: Using a Gigant only insures that delivery becomes a suicide mission, both in trying to fly to the target, and deliver the weapon.

That was the idea, a suicide mission, although I forgot the bomb's effects, I thought it wouldn't be able to jettison a 20-ton bomb or would disintegrate in the process.
Top

Have thought about it, lots of loose ends and dots to connect.
My wife's uncle was in Patton's HQ company. He is deceased now but we have some of the maps. The bulge push never made sense to me. Thin supply lines etc.
Looking at official June 1945 map I agree, likely it was a trap to draw concentrate 3rd Army to one area. An area that could be isolated long term for eventual safe use.
As to why the trap was not sprung probably political maybe or technical problem.
Top

Third printing as first had a few errors, second had data denied by AEC as inaccurate(later retracted) and third printing with proof.
No rebuttal from anyone on data in third edition. U234 had enough enriched uranium for 11 'little boys'. He found the U-Boot records in Georgia and follows the path/timeline from U234 to first bomb Japan.
So Germany did give refined u235 to United States as agreed in operation Sunrise. It came from the I.G. Farben plant and the waste was found in 2011. The propaganda said discovered waste was post war but has been proven otherwise. Some details are still denied by 'classified' method but enough is out there to rewrite history.

And the now fat lady is singing.
Adios Amigos..

Dear all, Please see below link to a new book on SS General Hans Kammler

The Hidden Nazi: The Untold Story of America's Deal with the Devil

The Hidden Nazi.jpg
You do not have the required permissions to view the files attached to this post.
Top

Well, well. It appears that someone has finally decided to take a close look at just what became of the infamous General Ing (Engineer) Hans Kammler. This is the man who in my opinion was probably the single most powerful person in Nazi Germany at war's end. He had to have something in his possession that was quite valuable in order to be in a position to pursue a bargain with the Allies at all, let alone to go underground with a new identity, to say nothing of being given important work to do in the American military industrial complex after the war.

Assuming for a moment that Kammler did not die in 1945---as appears likely---the question then becomes, just what did he have in his hands that allowed him to avoid the hangman's noose?

Interesting the extent of Stalin's three atomic development plants in the Urals. 1945 no less...
I'm wondering just how many countries were actually close. The fizzle on eastern front probably greatly accelerated Soviet development.
Maybe spies not necessary after all.
http://dracobooks.com/The-Decryption-of ... haupt.html
You do not have the required permissions to view the files attached to this post.
Top

Some reviews of the new book on SS General Hans Kammler - The Hidden Nazi: The Untold Story of America's Deal with the Devil.

1. Advance praise for The Hidden Nazi from Pulitzer Prize Finalist, author and historian Arthur Herman:
It’s strange that no one has yet written a biography of SS General Hans Kammler, one of the brutal masterminds of the German military-industrial complex and the Holocaust. But when you read ‘The Hidden Nazi’ you will realize that until now no one had the knowledge, persistence, and sheer nerve that the authors brought to the job of unlocking the multiple mysteries surrounding this evil genius of the Third Reich.

It’s a story where Schindler’s List meets Doctor Strangelove. Read it, be amazed and shocked by what Kammler did, and outraged by how he escaped final justice; but above all read ‘The Hidden Nazi.’

Gandhi & Churchill: The Epic Rivalry that Destroyed an Empire and Forged Our Age.
1917: Lenin, Wilson, and the Birth of the New World Disorder.
Freedom's Forge: How American Business Produced Victory in World War II.
To Rule the Waves: How the British Navy Shaped the Modern World
Douglas MacArthur: American Warrior

2. Advance praise for The Hidden Nazi from award-winning, NYT bestselling author James Swanson:
Wernher von Braun called him “The greatest rogue and adventurer I have ever seen.” Albert Speer damned him as “One of Himmler’s most brutal and most ruthless henchmen.” He engineered the Holocaust, built the concentration camps and perfected the gas chambers and crematoria. He pioneered slave labor, and masterminded rocket, fighter jet and secret, wonder weapon production. And at the end of W.W. II, he vanished without a trace. Enigmatic SS General Hans Kammler is the most diabolic Nazi you’ve never heard of.

Dean Reuter takes readers on a gripping, exciting and suspenseful hunt in search of the mysterious war criminal. The Hidden Nazi is a fascinating forensic detective story that reads like a great crime thriller. Did Kammler fake his death and survive the war? How did he escape justice? Did America strike a deal with the devil in exchange for his secrets?

Splendidly written with verve and expertise, The Hidden Nazi is storytelling at its best.

I'll have to read, it does seem to follow the official story line except Kammler's end.
Top

This book is based on recently declassified information. The British do not observe their 50 year rule regarding certain things. A significant portion of T-Force documents are still classified. A report prepared by the Army Security Agency in 1946 was not declassified until 2009.
Top

"He pioneered slave labor" - slave labor was pioneered by the Germans during the Great War.
Other his "achievements" (one of the brutal masterminds of the German military-industrial complex and the Holocaust) are equally false.
Top

AllenM wrote: ↑
31 Jul 2019 16:31
This book is based on recently declassified information. The British do not observe their 50 year rule regarding certain things. A significant portion of T-Force documents are still classified. A report prepared by the Army Security Agency in 1946 was not declassified until 2009.

American archives from WWII were largely declassified in two waves of documents. The first and smaller of these was in 1978. The second, much larger release came in 1995, 50 years after the end of the war. The UK national archives, though organized and administered along broadly similar lines, are definitely more secretive in general than the American version.

There are, however, still some significant sections of NARA's WWII papers that are not available to the public. The only way to view these is with a FOIA (Freedom of Information Act) request, but bureaucratic resistance to these has increased considerably in recent years. I suspect that some of this is due to resentment towards the late Chuck Hansen, who was often able to outwit archivists using multiple FOIA filings which often came back with different sections blacked out---meaning that he could sometimes piece together entire documents from various copies that each had different sections redacted. I think there are other factors in play, as well, but that's for another time.
Top

The Americans continue to release formerly classified documents every quarter. The problem is some document/file titles are far too vague to determine what the actual contents might be.
Top
1231 posts