The Germans adopt electronic warfare in the BoB

Discussions on alternate history, including events up to 20 years before today. Hosted by Terry Duncan.
9 posts • Page 1 of 1

The Germans adopt electronic warfare in the BoB

In June 1940, it was apparent that France was finished. The Germans now had to consider what they'd do about Britain if the British continued the war. As part of this, somebody higher up in the Luftwaffe recognizes that the British having radar--yes, the Germans knew the British had a radar system--could possibly use it to assist in defending their home islands. It is suggested that powerful jamming stations be set up in France to block the British radar stations and this is accepted and such stations are set up by late July 1940.
In addition, moving things up about 18 months, the Germans have discovered Drüppel (aka Window / Chaff) and instead of alarm and trying to keep this from British knowledge, they begin production to use it against British radar.
The objective all this is to buy the Luftwaffe time to get airborne, assemble, and send raids against Britain that can't be detected or can't be determined early in size and direction reducing RAF response times.

The question is, would it be effective?

Would adding airborne jammers to this a few months later be helpful?
Top

The Luftwaffe could simply have taken the much more direct approach and bombed the Chain home stations more thoroughly than IRL.
Top

The German and British approaches to radar were different. THe Germans flew the Graf Zeppelin off the coast to listen for farad, but were looking in the wrong part of the electro magnetic spectrum, It wasn't someone high up who had to relaise the British had radar, but someone technical to realise that the British might not be using the same wave lengths as the Germans.

Radar was only part of what made the system work. The Dowding system was an integrated air defence system not just radar. Information from a variety of sources - and radar only worked over the sea, was assembled and assessed live to disseminate as plots to Group and sector stations.

The Germans still have to shoot down over three times as many fighters as their own losses. The air battle took place over Britain. 2/3 of British pilots in aircraft shoit down would return to fly again. All Germans lost over the UK were lost.
Top

Ch was particularly difficult to bomb. There were two groups of antenna, one of three that were for transmission and another group of four for reception. The equipment that generated the signals and received them were usually in hardened buildings or even bunkers making them extremely difficult targets.
To take out the station you needed to take down at least two of the three transmission antenna and at least two of the receivers. Even if the transmission side were taken down, the British quickly found that a CH could operate off the transmissions of an adjoining station.
The whole system was in part so robust because it was so crude in design. The German Freya radar made it look like it was designed by amateurs and built by handymen in a shed out of scrap material.

When you add in that the British had also developed a mobile radar set that could be brought in to fill gaps and were adding CHL to the system, it becomes an almost Herculean task to take the whole system down. The Allies found in the lead up to D-Day that German radar sets were equally hard to take out and often difficult to locate.

On the other hand, a series of high power noise jammers could blanket a wide section of the system all at once. Chaff would work against every radar that used the wavelength(s) it was designed to counter.
Top

While I would agree that bombing the network was not easy, it was still the most practical method, given the time constraints. Note the Luftwaffe did not need to disable the entire net, only the 200 mile corridor that they could use to fly from France to Southeast England. The biggest issue the Luftwaffe faced during most of the battle was that their bombloads were often restricted to smaller bombs that would fit in the aircraft of 1940. These bombs did not have the shock blast capable of dropping a large tower with a near miss. Also goes without saying that any raids of this nature would need to be done during daylight, despite losses.

Jamming works best when the jamming set has a similar frequency range to the target set. Since CH stations were large, longer wavelength sets, only similar sized jammers would work. Wurzburg portables could easily be brought to the coast had they been available, but they were too short a wavelength. In any case they would not be powerful enough.

There was simply not enough time to build large stations on the French coast in time for the B of B. Perhaps a shipborne unit or two would help? But these in turn would be vulnerable to British bombers.

Of course the biggest obstacle to progress would be getting Goering to listen to his science and tech advisors instead of being a fat blowhard.
Top

There were several other components to the Brit warning system.

1. Radio intercepts of the bomber groups forming up over their airfields. The Luftwaffe was weak on all aspects of radio security & the transmissions from the bomber commanders while forming up were a early alert to the Brits.

2, Picket boats in the Channel. Despite German efforts to neutralize these their observation reports gave information confirming the radar observation.

3, Ground observation stations. Unlike the Chain Home radar which observed the approaches the ground stations reported on observation of aircraft crossing the coast line & in the interior.

I think that during daytime raids early in the BoB this really would make little or no difference. Radar was primarily useful at that point for an early warning that a raid was forming up over France. That allowed an earlier alert to go out to bases but beyond that, it wasn't acted on. As the raid crossed the Channel, spotters could give better data to the fighter direction system as they could count the planes, their exact number, altitude, and type(s). That allowed the RAF to mount a defense in proper numbers and position it correctly.

Radar became more important for two situations; The first was the low level raid. These were much harder to detect and the warning time was much shorter. CHL radar (Chain Home Low) gave much earlier detection and warning of these. Jamming the CHL system would counter some of that advantage day, or night.
The second situation is when the Luftwaffe switches to night bombing. Now radar is of great importance because it becomes not just the primary detection system but the primary means to direct the response. Jamming here would have negative effects for the British. Noise jamming would have a similar effect to RAF use of the Mandrel jamming screen. It reduces detection range but at the same time alerts the enemy that something is up when it comes on. Fixed jammers in France could have served similarly to the Mandrel jammers the RAF used.
Drüppel (aka Chaff / Window) would also be reasonably effective. The British radar sets of the period were privative enough that dropping lots of chaff would have blinded the sets with little means to negate the effects. The Germans introduced doppler radar to reduce chaff effectiveness and I'd think the British would too. But, it would take months to get something in place and in the meantime British radar would largely be ineffective. That could have really helped the Germans in night raids.
Top

One of the best contributions made by CH during the battle is easy to overlook.

Of course it was invaluable in detecting Luftwaffe threats, estimating their size, range and heading. This would allow Fighter Command to intercept with the minimum of wasted time and allow at times to size the quantity of intercepting aircraft appropriately.

However it was equally important for what it did not see. If there were no imminent threats detected, then Fighter Command could stand down and rest its pilots. If a large threat was detected, but no others, fighters could be vectored in from other sectors to lend a hand.

This was a key advantage to the RAF and if the system was interfered with on a large enough scale, the RAF may have been hit for six.
Top

Well, CH was pretty crude at the time. It used an A-scope display for range and a goniometer was used to determine bearing. Because of its very long wavelengths altitude and size of raids was almost a guess. At 100 miles, the lowest detection altitude was about 13,000 feet. Fighter Command was still very dependent on observers both in the Channel and on land to call in details of raids as they approached. Radar helped in daytime, but it wasn't a panacea or miracle device it's sometimes made out to be.

The really BIG innovation the British came up with was the Fighter Direction Center that received all of the inputs and could coordinate the defense. That was a major improvement over standing patrols and a crude telephone system of command that gave each airfield some basic orders like the French, Russians, or Japanese had. Even the Germans didn't have such a system in 1940. 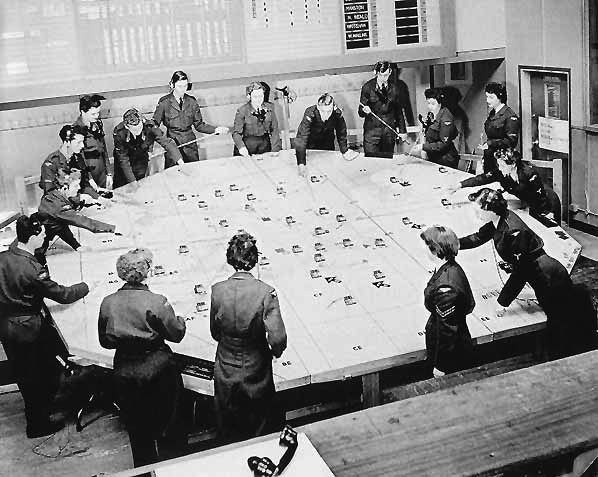 Return to “What if”